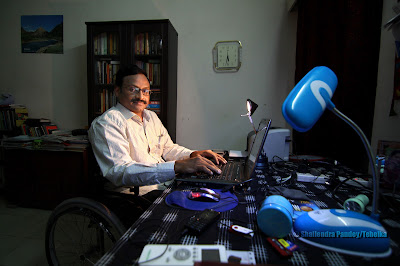 Democracy and Class Struggle say while Maharashtra Police are trying to frame GN Saibaba the Times Of India have just published this report on his life story.
It is the story of a true son of India and one of India's 21st Century heroes who struggles for the hundreds of millions marginalised by India's neo liberal economics and politics.
Whither India in the 21st Century ? The road of GN Saibaba gives hope to the people - the neo liberal road despair.


NEW DELHI: It's a fortnight since the police raid on Delhi University teacher G N Saibaba. The Ram Lal Anand teacher who police allege is "an urban contact" for Maoists, was asked to appear before the Maharashtra Police "out of Delhi or at Nagpur". Pointing out he's 90% disabled and uses a wheelchair, he's asked cops to conduct their "inquiry" in Delhi.

Born in Andhra's Amalapuram in 1967, Saibaba's known poverty first-hand. "He didn't have electricity at home," says his wife, "He got a wheelchair after coming to Delhi in 2003. Before that, movement was by crawling." His father grew rice on his three-acres but by the time Saibaba was 10, he'd lost that to money-lenders. A consistently stellar performance in class ensured scholarships throughout. But the fee for his entrance test for master's in Hyderabad was paid by his wife, then girlfriend.

He met Vasantha at a coaching class and they fell in love over grade 10 maths homework. The duo "exhausted" the literature section of the Amalapuram library. "My interest in politics is through literature." He read Gurujada Apparao (1862-1915) and Sri Sri (1910-1983) and "revolutionary literature in Telugu." His favourite author is Kenyan Ngugi Wa Thiong'o whom he met at a seminar.

Vasantha can't find the photos. "When the police returned the photos, those of Sai with Ngugi weren't there," she says. "They probably thought Ngugi's a Maoist," jokes Saibaba. The loss of the three hard discs is less funny. One had personal photos; another videos of protests; the third three manuscripts he's been working on.

Saibaba finished at SKBR College at the top of the university. Vasantha funded the trip to Hyderabad and a new set of experiences - he left Amalapuram and saw a train for the first time. Later, as an activist of the All India People's Resistance Forum (AIPRF), he travelled over 200,000 km to speak in support of liberation movements in Kashmir and the north east and campaign for dalit and adivasi rights.

Saibaba cut his political teeth with the Radical Students' Union during his MA-MPhil days. "My political life began with the Mandal Commission and the fight for reservation." Vasantha joined him in Hyderabad. They married in March, 1991. "RSU organized a public meeting on man-woman relationship," says Saibaba. The couple laughs at the odd way of solemnizing their nuptials, "We spent Rs 832 including registration." Till after their daughter's birth, Saibaba was practically a full-time activist with AIPRF. He abandoned his PhD; Vasantha joined a women's organization.

In Delhi, he returned to academics. He taught at Sri Venkateswara for three months in 2003 before moving to RLA. In 2005, AIPRF evolved into the Revolutionary Democratic Front (RDF) -- accused of being a Maoist front. "We have an ideological understanding," says Saibaba, "But no organizational linkages." RDF's members have been arrested before and it was banned in Andhra last year. In Delhi, Saibaba organized fact-finding missions to Jharkhand, Kashmir, Assam and Manipur and completed his PhD.

The raid last week and the support from activists made him a curiosity. "I told my students why it happened." Saibaba believes it's an attempt to silence critics of Operation Green Hunt (OGH), started in 2009 to ostensibly counter Maoists. But activists believe OGH's main aim is "killing adivasis," clearing the area for mining. Saibaba, -----convenor of the Forum Against War on People, states, "We didn't take this campaign up for the Maoists."

The raid on Saibaba came close on the heels of the arrest of JNU student Hem Mishra who allegedly mentioned Saibaba's name. "If they can come to raid," says Vasantha, "They can question him here."