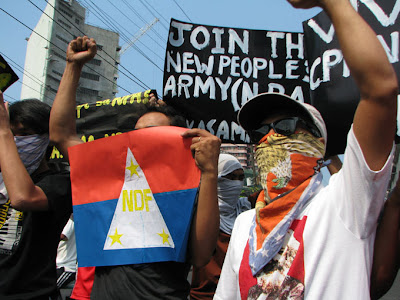 The Communist Party of the Philippines (CPP) today issued the following statement:

Information from supposed military sources that there are negotiations for the integration of New People's Army Red fighters into the Armed Forces of the Philippines (AFP) ala-MNLF (Moro National Liberation Front), and offers for NDFP Chief Political Consultant Jose Ma. Sison to join the Aquino cabinet are completely baseless and ridiculous.
There is information that certain anti-Aquino elements of the ruling classes within and outside the AFP, specifically those identified with the previous regime, are trying to sow dissension among military officers by circulating false and incredulous claims that the ruling Aquino clique is leaning towards the side of the CPP-led revolutionary forces.
Obviously, the objective is to consolidate their camp inside the AFP as a foil to repulse the legal, political and economic maneuvers of the ruling Aquino clique to undermine its rivals. Another further objective is to push the Aquino regime to drop its pretensions of peace negotiations with the National Democratic Front of the Philippines and its human rights rhetorics.
Such rumor-mongering marks the further worsening of the factional strife among the rival political cliques. These political rivalries weaken the entire ruling system and are advantageous to the Filipino people and their revolutionary forces.
Posted by nickglais on 1/22/2012 01:50:00 PM