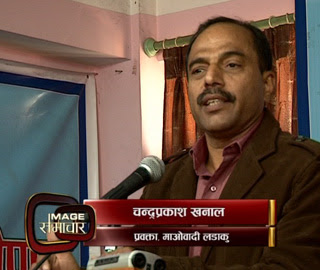 The spokesperson of the People's Liberation Army (PLA) of the UCPN (Maoist) Chandra Prakash Khanal has said that the integration process will not move ahead until the PLA commander gets the post of Major General in the NA while integrating the combatants.

Speaking at a programme in Kathmandu on Sunday, Khanal said that the PLA will not go ahead for the integration until the political parties agree to integrate the top commander of the PLA as the Major General of the NA.
“Integration based on the personal qualification is not acceptable for us. We want respectful integration,” he added.


He also said that if the combatants opting for integration are not integrated due to the limit of the agreed numbers, they should be provided compensation package.
“Until the gap between the numbers agreed upon and the numbers opting for integration is not addressed, we will not discharge the combatants who have chosen for voluntary retirement,’ he warned.


Comrade Kiran in his latest report to the CC UCPN Maoist said :


"The People’s Liberation Army is being dissolved in a humiliating and insulting way.  The integration of People’s Liberation Army is being done in DDR (disarm, dissolve and rehabilitate) model on the basis of individual recruitment and disarmament, instead of opting for SSR (security sector reforms) model".
Posted by nickglais on 1/08/2012 04:38:00 AM