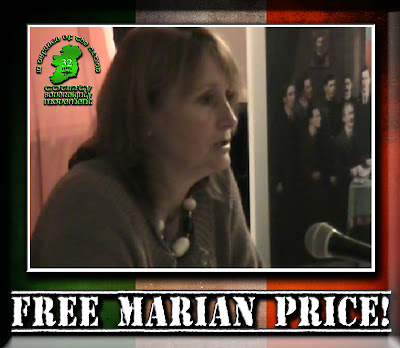 The continuing imprisonment of Marian Price in Maghaberry is a scandal and would be seen more widely in this light were it not for her politics. Ms Price is in jail on the order of Northern Ireland Secretary Owen Paterson, who signed a document last May ordering the police to put her behind bars.
She had been arrested on May 11th and charged with encouraging support for an illegal organisation. This arose from an action at the 32 Country Sovereignty Movement’s Easter commemoration in Derry city cemetery: on a blustery day, she reached up to hold the script from which a masked representative of the Real IRA was reading the ‘Easter Message’.
Two days later Ms. Price appeared at Bishop Street, where she applied for and was granted bail. She was rearrested when she came out onto the steps of the courthouse.
Mr Patterson had signed a document the previous night purporting to revoke the licence on which she had been released almost 30 years earlier from a life sentence for the 1973 Provisional IRA bombing of the Old Bailey.
If the Derry court had remanded Ms Price in custody, the document would not have been produced. We might not know even now that it existed.
It is not clear whether the prosecution had been aware of the document as it argued against bail. What’s clear is that the bail application had been a farce. The role of the court had been rendered meaningless by Mr Patterson preparing the way in advance to have the decision set aside if it went against his wishes.

This was as blatant an abuse of process as can be imagined.
The offence is compounded by the fact that here is real room for doubt whether Mr Patterson had authority to order Ms Price back to jail in the first place.
Her lawyers insist she had been freed from the Old Bailey sentence on the basis of a Royal pardon and that the terms of the pardon supersede the powers of the Secretary of State.
The lawyers have asked three times for the pardon to be produced. Three times, the State has maintained that no copy can be discovered.
At one point, her solicitor was told that the pardon must either have been lost or somehow been shredded.


Thus, Ms Price has spent the last seven months in Maghaberry, not on the basis of conviction for a crime but because Owen Patterson believes that the State is better off with her out of the way. She is imprisoned without trial - in everyday language, interned.
She is the only woman in an all-male prison and thus, for practical purposes, in solitary confinement. She is 57 years-old and in very poor health and in constant pain. But these are not the main reasons she should be released.
She should be released because it is an affront to justice and to the rights of citizens that she has been denied her liberty, and even denied sight of the evidence which Owen Patterson says he has seen and which he claims entitles him to deny her her liberty.
Rights - or privileges
It is difficult to avoid the conclusion that the reason there hasn’t been more of a hullaballoo about this matter is that many of those who might have been expected to stand up for civil rights are repelled by Ms Price’s politics.
Which means in turn that the extent to which civil rights are defended in the political mainstream is to some extent at least determined by the political beliefs of whomever is being denied their rights.


This means that the rights we speak of are not rights at all, but privileges to be granted or withheld according to a politician’s judgment of where the State’s interests lie.
The only adequate response is for all who value civil liberties to tell Mr Patterson loudly and with one voice – Free Marian Price now.
Eamonn McCann
The IRPSG believes this situation should be highlighted by all women’s groups and we strongly urge you to take up the issue and campaign on her behalf, as we know you have campaigned tirelessly on all issues  of sexism and discrimination against women and are sure you will focus on this central issue in this case also. We have also contacted the Crossroads Women's Centre to highlight this issue on the urgings of Emma Lewis, who is a members of ours and a supporters of theirs. We will supply whatever details of the case you need and attend whatever events you may wish to promote in this cause.
Comradely Gerry Downing
Secretary IRPSG