Movement in the Punjab by Harsh Thakor 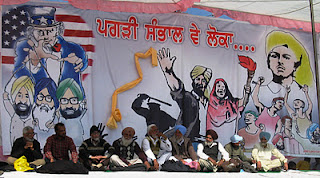 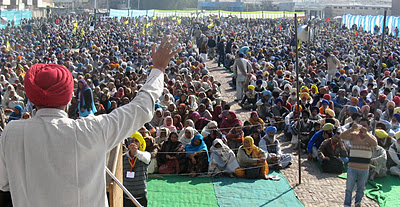 Mass gathering in the conference at Barnala in Punjab from the blog at lokmorcha.blogspot.com about 17000 people assembled on 27th January 2012


Amidst the intensified political atmosphere in the Punjab state assembly elections, a “Pagri Sambhal Campaign Committee Punjab” has been organized by different prominent and struggling personalities. The committee will hold a State level “Pagri Sambhal Conference” on January 27th at Grain Market Barnala to strip bare the deceitful game of elections and to proclaim the actual pro-people path of struggle.

In Punjab the mass revolutionary Movement is making history by staging a huge pagadi Sammelan conference in Barnala on February 27th.The purpose of the conference is to create political consciousness to the broad revolutionary masses on the coming parliamentary elections in Punjab on January 30th, be it the students,youth,working class or peasantry. A huge series of meetings have been held by the Lok Morcha Punjab,the Bharatiya Kisan Union-Ekta(Ugrahan),the Punjab Khet Mazdoor Union and the Naujavan Bharat Sabha propogating that all the political parties are simply hoodwinking the people and fighting to the last to mobilize the struggling sections to attend the meeting in Barnala.
All these organizations have played a prominent role in the democratic revolutionary movement of Punjab. They do not support candidates or participate in parliamentary elections nor do they call for boycotting parliamentary elections.They believe that the peoples day to day class struggles have to be  built up and political consciousness built up for the masses to assimilate politics of agrarian revolution and to build their own democratic institutions of political power. Today the peasantry is subjected to the burden of merciless exploitation becoming victims of money lenders and are forced into debt resulting in a series of suicides. The landless labourers, mainly dalits are denied their minimum wages or the right to own a plot.The working class is subordinated to unprecedented repression in terms of retrenchments,denial of living wages and improper working or living conditions. The youth are victims of unemployment because of the tentacles of globalization and privatization and similarly the student community hardly has access to proper facilities nor can afford the exorbitant fee hikes.The problem with the working class is that 90% of it’s composition is of migrant labour from other states like Bihar ,Uttar Pradesh etc.All these workers are not the true proletariat as they virtually became destitutes in being unable to earn a living income from their lands and any time would be retrenched and be forced to return to cultivate and defend their lands. This sharply contradicts any thesis that India is a fully developed capitalist society. The chief problem of the peasantry is the non acceptance of the landed section s to accept the landless Dalit class peasntry into the struggles.This is why separate organizations were created for the landed and landless peasantry.A model organization has to be created for the uniting of both the classes especially considering the organization of the Dalit peasantry.
While addressing the press conference, committee members declared that all the opportunist political parties, along with the ruling Akali-BJP combine, Congress and so called third alternative of Manpreet-Left brand Front, are in agreement with those anti-national policies which are responsible for the crises of farm-laborers, farmers, industrial and electricity workers, employees, un-employed, youth, and women in Punjab as well as in country. In Punjab too, people have lived through and experienced the rule of different political parties but to no avail. The toiling people, therefore, in order to get rid of their crises, should organize and march forward on the path of intense, united struggles. They further said that though the government will be changed as a result of the present elections, but, they warn, no one should hope that the policies, serving the interest of feudal lords and national-multinational capitalists; and exploiting and oppressing the people, will ever change through elections. Neither the repressive black laws, framed only to impose these policies on peoples, will be changed; nor the police, the jails and the bureaucrats, who punish people for demanding their rights, are going to change. Through elections, these parties only resolve the issue of political power and the division of the plunder among themselves.
The Lok Morcha ,Punjab a more advanced political body held a meeting for activists on Bhatinda at Teachers Home on January 15th on the revolutionary alternative. Here the people were meticulously explained the need to propagate to the common people to form their alternative forms of political power.Gurdial Singh Bhangal gave a historical preview explaing how since 1947 the peasants and workers were denied their basic rights and how from the 1990’s the globalization has worsened their plight.N.K.Jeet explained the same with economic figures and examples. Finally Amolak Singh theoretically projected what the revolutionary democratic state would resemble. The author was deeply impressed with the readiness and preparation of the activists who attended the meeting.They listened to everything intensely assimilating the politics projected.