South Korea banned the opposition Unified Progressive Party in 2014 : "The ban on the UPP raises serious questions as to the authorities' commitment to freedom of expression and association," Amnesty InternationaIs Roseann Rife said in a statement. 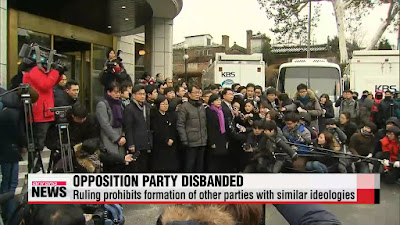 The Unified Progressive Party in South Korea was banned in 2014

The leftist Minjung Party, which was organized in October 2017 mostly by the members of the dissolved Unified Progressive Party, called Lee Seok-ki and Han Sang-kyun prisoners of conscience and urged President Moon Jae-in to release them on a special pardon.

FORUM ASIA urgently calls on the Government of Republic of Korea to:

1. Grant pardon to all prisoners of conscience who have been unjustly charged and sentenced to prison terms, including lawmaker Lee Seok-ki and the six other former UPP members, as well as Sang-gyun Han, the leader of the Korean Confederation of Trade Unions.

The Government must stop all continuing investigations and detentions regarding these cases.

2. Stop all ongoing investigations and current detentions in similar cases ; and

3. Review and amend all laws that restrict the rights to freedom of expression and peaceful assembly in the Republic of Korea.

6 leaders of religious groups in Korea, most civil society groups and human rights organizations are calling for unconditional release of all the prisoners of conscience.

Amnesty International demanded the release of prisoners of conscience in Korea in the 3rd UN UPR, November 2017.

The Unified Progressive Part was founded in 2011 through a merger of small progressive groups.

It had five lawmakers who the court ruled should lose their seats.

The move to disband the political party has drawn criticism that it could limit freedom of expression in a country once ruled by military dictators who had a history of banning rival political parties.

"The ban on the UPP raises serious questions as to the authorities' commitment to freedom of expression and association,"

Seven UPP members were sentenced to prison terms of up to nine years for either inciting rebellion or violating the South Korean security laws.

The charge levied against the leftist party that it was planning a rebellion against Seoul led to the conviction of seven party members.

They are now serving prison terms of up to nine years