Democracy and Class Struggle says after 70 years of nuclear blackmail by the United States of the DPRK the DPRK has now trumped Trump with a nuclear deterrence of their own - so any aggressor knows the devastating price they will have to pay for violating North Korean Sovereignty,

The United States should leave the Korean Peninsula and the 38th Parallel another US creation made in 1945 on a map in Washington without Korean consent must come to an end.

On the day after Nagasaki was obliterated, John J. McCloy of the War Department asked Dean Rusk and a colleague to go into a spare office and think about how to divide Korea. They chose the 38th parallel, and three weeks later 25,000 American combat troops entered southern Korea to establish a military government - Bruce Cumins in a Murderous History of Korea.

Russia not the United States is a possible mediator for North and South Korean dialogue of re-unification  of the Korean Peninsula just like in the Middle East the role of United States is coming to an end - what we see are last final attempts to retain US hegemony in North Asia by unleashing Japanese Imperialism and the Ideology of Nippon Kaigi.

Unleashing Japanese Imperialism will prove the dialectic of history at work again - the United States not the Korea's North or South will pay the price for this monsterous act. 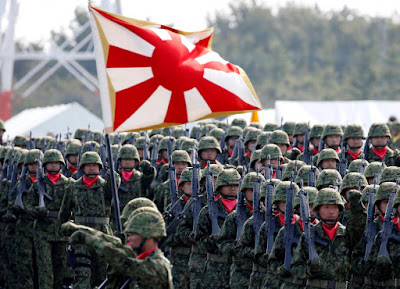