Nasrallah speaks : Trump’s recognition of Jerusalem al-Quds as Israel’s capital is an insult to all Muslims and a violation of international law. 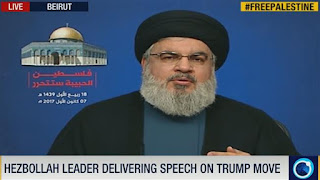 Democracy and Class Struggle days the dialectic of history is about to come into play and the State of  Israel rather than being helped by Trump's move -  will unite disperate anti hegemonic and anti imperialist forces against both US and Israel - and hasten the end the Arab Monarchies - the Arab Street's rise will be the demise of the State of Israel.

The secretary general of the Lebanese Hezbollah resistance movement says US President Donald Trump’s recognition of Jerusalem al-Quds as Israel’s capital is an insult to all Muslims and a violation of international law.

Speaking in a televised address to the Lebanese nation in the capital city of Beirut on Thursday, Sayyed Hassan Nasrallah said following Trump’s decision,

Israel would stop at nothing to push Palestinians from their homes and confiscate their properties, farms and gardens. He noted that following Trump’s remarks, Israel will certainly try to expand its dominion over the greater Quds and absorb more land in the occupied West Bank.

Another ambiguity that exists following Trump’s decision, Nasrallah added, was the fate of the sacred places of Muslims and Christians as Zionists will seize this opportunity to pose a major challenge to Muslims’ sanctities, especially al-Aqsa Mosque.

By recognizing Jerusalem al-Quds as Israel's capital, the Hezbollah leader said, the heart of the Palestinian issue, which is the city of al-Quds, has been erased from all possible talks, because the issue of al-Quds would fall out of the domain of any negotiations.

He added that when the US dares to encroach upon the most sacred city for Muslims, there is no doubt that other places, which are less sacred such as the rest of the West Bank, the southern part of Lebanon and other places will be open to similar actions if Muslims remain silent in the face of Trump’s decision.

He emphasized that silence of Muslims will make them vulnerable and pave the way for encroachment of enemies on other places of importance to them. He went on to note that the Zionist regime of Israel had no respect for international resolutions and paid no attention to all international condemnations, because it only cared about the US stance.

He added that Zionist media and analysts believed that since Islamic countries are plagued with their own problems, they had no time to react to Trump’s decision and this is why they ignored the entire international community and took such an insulting step.

Nasrallah said Americans and Zionists believe that even a reaction to Trump’s decision will be limited to a few days of protests, which will finally ebb and the situation would return to normal.

First of all, he said, Muslims must continue their protests against this outrageous step and emphasize the importance of the issue of Palestine for all Muslims, so that nobody would ever dare to do such things.

Hezbollah leader stated that protests should continue even if they are conducted by a few people, because they are needed to make voice of Muslims be heard by leaders at the White House.

He continued by saying that every man and woman, old and young, must take part in these protests, especially through social networks, while scholars must hold meetings on this issue and raise their voice in condemnation of Trump’s decision. Sit-ins must be also held, he added, referring to sit-ins conducted by Palestinians in various places, and said such moves will make Trump regret what he has done.

Nasrallah also stated that Arab countries must mount pressure on Israel so that the Tel Aviv regime would not dare to implement this decision in practice and encroach upon the property and homes of Palestinians in occupied land.

Hezbollah leader said all kinds of overt and covert contacts with Israel aimed at normalization of ties with Tel Aviv must be cut by all Arab states and all diplomatic ties with Israel must be severed followed by expelling the Zionist regime’s ambassadors from all Arab capitals. “Any step taken to normalize ties with Israel would be the greatest treachery against Palestine at the present juncture,” he said. Nasrallah emphasized that Arab nations and Palestinians must also clearly announce that they have lost their trust in negotiations with Israel and they will not continue talks with Israel.

Another measure to be taken, he added, was for Muslims to issue statements in their conferences, including those of Arab nations, emphasizing that al-Quds is the permanent capital of Palestine and its status as such will never change. Rekindling the Palestinian intifada, which has been proposed by certain parties, was another measure that Hezbollah leader described as the most important and greatest response to Americans and Zionists. Nasrallah also declared his support for anti-Israeli resistance, adding that resistance was the best way to counter Israel and its backers.

In conclusion, the Hezbollah leader called on all people – men, women and children – to take part in a huge rally against Trump’s decision, which will be held in Dahieh neighborhood on the southern suburbs of Beirut next Monday.
Posted by nickglais on 12/07/2017 09:24:00 AM