Jiln Daily in North East China - Threat of Nuclear Winter in the Age of Trump - Where are the anti Imperialists ? Democracy and Class Struggle says China should stop kowtowing to the United States and make it clear that a nuclear attack on North Korea is a declaration of War on China - Russia should make a similar declaration.

The South Korean People should take their future into their own hands NOW and OUT of the hands of the demented Dotard Donald Trump who controls South Korean Military  - the clock is ticking - act now.

We do not even have serious anti hegemonic struggle from China and Russia with Trump over North Korea and as for anti imperialism - the anti imperialists have disappeared with last years snow and millions of people are about to pay the terrible price. 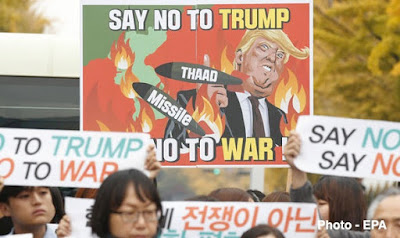