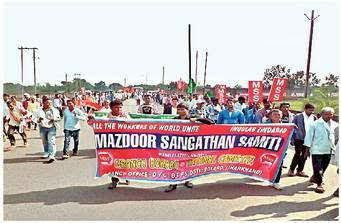 Students For Society strongly condemns the Jharkhand government's move to ban Mazdoor Sangathan Samiti (MSS), by branding it as frontal organization of the CPI (Maoist).

MSS has led glorious mass struggles in the recent past against the policies of the Indian state aimed to serve the corporate sharks.

They have been in the forefront of the struggles against arbitrary step of the DVC against workers in chandrapur and bokaro thermals.

They are building a strong adivasi resistance movement against the amendments to the Chota Nagpur Tenancy Act, (CNT 1908) and Santhal Pargana Tenancy Act, (SPTA 1949). MSS recently did mass gatherings against the fake encounter of the part-time farmer and tea staller Motilal Bhaske in Pirtand block, giridih. This mass protests had put the government under many questions.

So, the ban was simply to suppress the resistance and is a calculated step to create an atmosphere that will enable them to wipe out movements by attacking the organizations straight away and make them leaderless. In the name of maintaining Law and order & anti-naxal drive the Jharkhand government has banned 13 organizations so far.

It is also the time when the people's movement are growing and taking ground thwarting the corporate agenda.

Instead of examining flaws in its policies and giving accountability or political solutions to it, government is sticking to Fascist moves of branding & banning. Such moves have no place in democracy.

SFS demands that ban on MSS be immediately and unconditionally revoked. SFS also appeals all the progressive and Democratic sections to stand in support of MSS and demand withdrawal of ban. We also appeal all to fight the repressive state machinery and Exploitative development model which is aimed to serve the parasitic