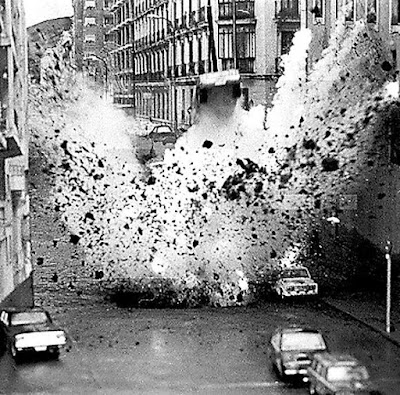 Mariano Rajoy and the Parti Poplaire the political Party that is the heir to Francoism in Spain should learn the lessons of history - history teaches that peoples patience is not infinite.


On 20th December 1973, Spanish fascist Prime Minister who was hand-picked as Franco's successor Luis Carrero Blanco was assassinated in Madrid. Basque separatists ETA had spent five months digging a tunnel under a road he went down to attend mass.

They then detonated a bomb as he drove over, shooting his car 20 metres into the air and over a five-storey building, earning Blanco the nickname of "Spain's first astronaut".

His successor was unable to hold together different factions of the government, and was credited by some of helping accelerate the restoration of "bourgeois democracy" not real democracy after Franco's death.

Film Re- creation of the assassination of Luis Carrero Blanco