Solidarity with Greek People from Revolutionary Praxis in Nottingham 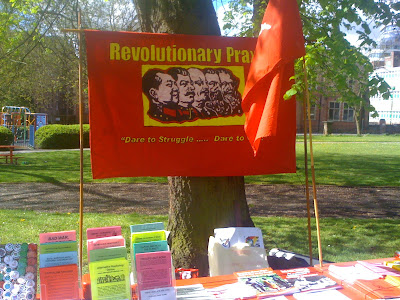 On Tuesday, 14th. February a demonstration in support of the struggle of the Greek people was held in Nottingham,England.  A member of Revolutionary Praxis gave the following speech:
'The Greek people are under attack from international bankers, EU governments and the Greek government.  As a result of the machinations and blundering of bankers and politicians the Greek people are being subjected to massive austerity measures – higher taxes, big cuts in wages and pensions, slashing of social services, record unemployment.
The Greek Parliament has voted for even more severe austerity measures demanded by European Central Bank, IMF and various banks.  But the Greek people have had enough. They  are rising in revolt as we saw in Syntagma Square.  This is just the beginning.  There will be more militant protests. The Greeks are showing the way forward for the rest of the people of Europe.
Greece was the birthplace of democracy which means rule by the people.  But in Greece today it is not the people who rule but the capitalist bankers and their political representatives.  The same is true in Britain where all the main political parties – Conservative, Liberal-Democratic and  Labour – are imposing massive cuts in public spending to prop up the capitalist system.  This is rule by the rich, for the rich.
But capitalism is in trouble.  That’s why the political leaders have started burbling about we must have “fair” and “responsible” capitalism, telling bankers to reduce their massive bonuses.  Don’t be taken in.  The real problem is capitalism itself, a system of oppression and exploitation.  It is a system reaching its end, becoming ever more decrepit and dysfunctional.  Capitalism only works for the rich 1% but is no good for the 99%, the rest of us, who do most of the work.  If we do not destroy capitalism, it will destroy us.
In Britain the Coalition Government is holding down earnings, reducing welfare benefits, cutting public services and attacking pensions – all to pay back the bankers the British government borrowed from to prop up the bankrupt bankers.  At the same time Prime Minister Cameron rejects a financial transactions tax claiming that he is defending the British people.  In reality he is defending the interests of his rich friends and relations in finance capital.  He defends the rich, not the poor.
Here in Nottingham the Labour City Council is about to bring in its second cuts budget, knocking £20m off public services while raising Council Tax by 3.5% (Should we pay it?).  It is services for vulnerable groups such as the old, disadvantaged children, young unemployed and the homeless who are particularly hit.  Also 195 council workers will lose their jobs.
People have been protesting about both national and local public service cuts but we must do more.  The politicians don’t care if all we do is sign petitions and demonstrate.  More direct action is necessary and the Greek people have shown the way forward. We need to confront politicians and administrators who are implementing the cuts.  We need to give them a hard time, make them feel nervous, to become afraid to face the people they are attacking.
Nottingham City Council will be meeting on Monday, 5th. March to pass their cuts budget.  We need to mobilize people to demonstrate here at the Council House to tell the Council ‘No Cuts in Nottingham!’  Following the splendid example of our Greek brothers and sisters, we should aim to turn Old Market Square into another Syntagma Square. '
NO CUTS IN NOTTINGHAM!
VICTORY TO THE GREEK PEOPLE!
PEOPLE OF EUROPE, UNITE AND FIGHT!