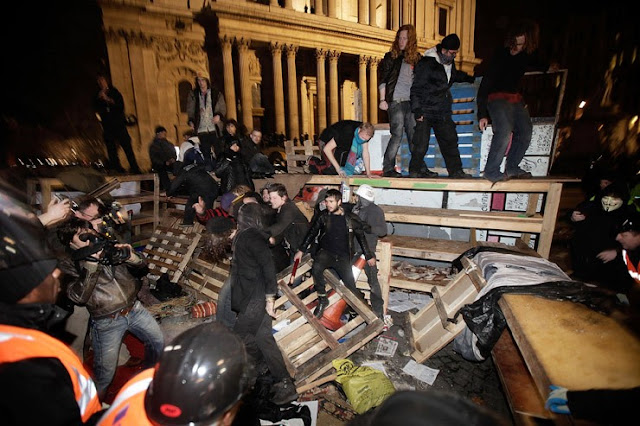 The last thing to go were the kitchen shelves. Around a dozen occupiers peacefully resisted to the last; a short distance away a vigil continued on the Cathedral steps as others observed, supported, prayed and remembered. The police cordons made the groups seem further apart than they actually were.

On the steps, a mini GA discussed events as they were happening around it – and in particular the collusion of Saint Paul’s Cathedral in the eviction they had previously said that they did not want to see.
At around 2am in the morning, the floodlights which illuminate the neoclassical edifice of that great building were turned off. When the lights returned, four policemen could be clearly seen on the balcony, in silhouette.
Not long afterwards, police were given leave to clear the steps themselves, the site of former Canon Chancellor Giles Fraser’s famous intervention of 16 October, when he asked the police to leave and recognised our right to assemble. Giles Fraser, who is so much a part of this story, was prevented from crossing the police lines to reach the Occupy London Stock Exchange site tonight. We would have liked to see him there.
This morning, the City of London Corporation and St Paul’s Cathedral have dismantled a camp and displaced a small community, but they will not derail a movement. The attention given to the final hours of the Occupy London Stock Exchange site is testament to that. We would like to thank all those who got the word out on social and traditional media overnight. We are deeply appreciative of the sustained attention we have received; it’s all the more precious at absurd hours of the morning.
The natural question to rush to in these moments is “what next?” In the short term, there will be a GA at 7pm on Tuesday by the steps of St Paul’s. In the medium term, it is only right that people will need time to rest, reflect and recharge, to take stock and learn the lessons of the past four and a half months. But be assured that plans are already afoot: plans of some ambition, employing a diversity of tactics and delivered with the aplomb you would expect from us. All will be revealed in time. May is one of our favourite months.
This morning also saw the eviction of the Occupy London School of Ideas in Islington in, to say the least, somewhat unorthodox circumstances, while their case was still progressing through the court system. We trust that occupiers will be able to fully retrieve their belongings before what sounds like a hastily brought forward demolition is enacted. What happens to Southern Housing Group’s planning application this week deserves careful examination, as do the views of local people living near Bunhill Row.
We’ll miss Occupy London Stock Exchange but not because of the tents, or even the kitchen shelves: it was a makeshift, loosely cooperative, occasionally quarrelling and fiercely idealistic group of people who came together to achieve something extraordinary. The relationships forged during these strange and beautiful four and a half months still have much further to run. This is only the beginning.
Occupy London Press Team
Posted by nickglais on 2/28/2012 10:58:00 AM