Morocco: A January of revolt and repression for the new government 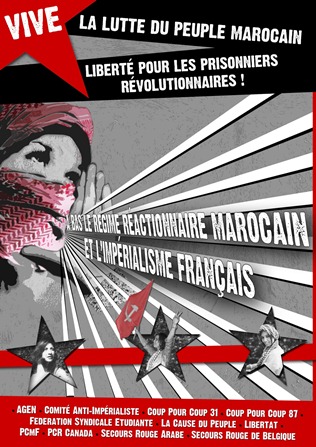 The struggles of the Moroccan people have continued with force during the month of January. Labour struggles, peasant struggles, the unemployed, the Amazigh [Berber] movement, the struggle in support of political prisoners and against the impunity of the dictatorship, all over Morocco, people are expressing their unease over the situation and the need for profound, real change. The February 20 Movement is demonstrating in the streets and preparing the first anniversary.
What follows is a short overview of some of the struggles.
Taza
On 4 January following a protest by the Association Nationale des Diplômés Chômeurs du Maroc (ANDCM - National Association of Unemployed Graduates in Morocco), which was the object of police violence, there was an uprising in Taza in which more than 20 people were seriously injured, five of them policemen.
Since then, Taza has undergone an impressive police occupation, which has, however, not prevented continued demonstrations demanding the release of detainees.
On 3 February last there were serious clashes which left more than 150 wounded, with many arrests. The situation is extremely tense.
For more information on the Taza uprising:
http://www.youtube.com/watch?v=nogSZcRn05M
Workers struggle: miners in Ben Guérir, agricultural workers, municipal officials...
Workers' struggles continue to shake Morocco, from the explosion of protests by phosphate miners in Ben Guérir, to strikes in various sectors of the civil service and the struggles of farm workers.
For over a year, workers at Ben Guérir phosphates mines belonging to SMESI, a subsidiary of Office Chérifien des Phosphates, a leading Moroccan company, have been demanding satisfaction of their demands.
Tired of being ignored, they have been occupying the explosives dump and threatening to blow it up with themselves inside.
Video and information on the struggle:
http://www.youtube.com/watch?v=bIMTl8epJ3E&feature=share
http://www.lakome.com/جهات/69-جهات/11739-2012-01-20.html
Strikes by workers in local government, healthcare, education, etc. are taking off. On the other hand, agricultural workers are keeping up their global campaign claims, while other struggles continue, such as that of farm workers working for Nufribel, a Spanish multinational, in Agadir or on the farms in Tiniguir-Dakhla, belonging to the Domaines Agricoles company, belonging to the king, which are State-owned farms [1].
The struggle of the unemployed, even to the death
Abdelouahab Zaidoune, 27, a postgraduate in law from the University of Fez died on 24 January after setting himself on fire, along with two comrades, outside the Department of Education in Rabat.

The many years of struggle and of being ignored has led this group of graduates to utter despair.
On the other hand, the ANDCM has begun a campaign from its regional, provincial and local branches with demonstrations, rallies, sit-ins, etc., in every corner of Morocco, always linked to popular demands, not only of the unemployed, and in many cases with the involvement and participation of the population, as was the case in Taza.

Then there is the exemplary struggle of the Amazigh women of Assoul, in Tinghir province, who have travelled 200 km on foot in order to reach Midelt and catch a bus to Rabat, 400 km further away. There they held a rally outside the parliament to denounce the looting of common land by local chieftains, with the connivance of the State.
Videos of the struggle in Imider:
http://www.youtube.com/watch?v=-MZ9xvYOE9s&feature=player_embedded
http://www.youtube.com/watch?v=-5bwDBm92p0


A January of struggle

The Amazigh movement celebrated the Amazigh New Year with a demonstration in Rabat on 15 January, showing that despite the recognition of an Amazigh identity in the new Constitution, the struggle for economic, social and cultural rights of the Amazigh people continues.