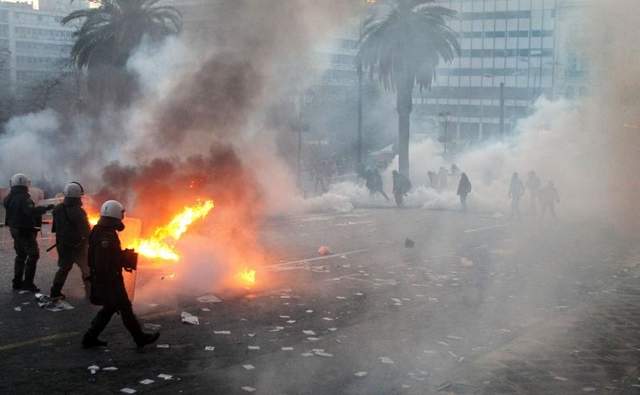 Through an unprecedented proclamation of the Greek PM-administrator  to the Nation late tonight,the Greek Regime has launched a direct terrorist attack against the Greek citizens,threating that if the new memorandum with the IMF,EU and ECB won't pass through the parliament Sunday night, the consequenses for them will be dramatic.
In a televised message transmitted nationwide, Loukas Papademos stated that the adoption of the new treaty-law tommorow by the Greek parliament is a one way procedure for the country..

He refered to the (false) fact that the projected annual income of the Greek State has a primary deficit of 5.5 billion,that means that even if Greece stops paying its public dept, the payment of salaries and pensions will not be possible.

The never elected Greek administrator,went one step forward terrorising the citizens, giving dramatic emphasis to the threat that in case the new memorandum with the dramatic austerity measures won't pass tomorrow evening by the parliament, then starvation,lack of fuel, medicins and other commodities essential for the daily life will appear in the country!

The overal speech of the Greek PM,constitutes a direct attempt to apply state terrorism to the Greek population ,a practice that cannot and will not be tollerated by the citizens and/or the international community...
stopcartel Newsdesk 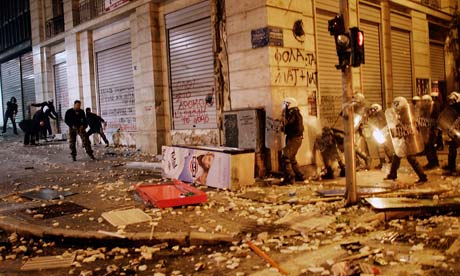 THE BILL WAS PASSED BY THE GREEK PARLIAMENT


01.06 The new memorandum has just been voted in parliament.

It was decided by the assembly of the occupied law school for the occupation to continue.
We call all the people to take to the streets, to keep on fighting!
Nothing has ended, everything begins now.
The law school is a centre of struggle and will continue to be so!

00.42 In parliament, the voting process for the new memorandum started a few moments ago. It appears very likely that it will be voted through.
00.22 A few hours ago, enraged demonstrators in the city of Corfu stormed the offices of the local ‘socialist’ MPs Gerekou and Dendias (an ex-minister of Justice), destroying them completely.
00.20 The town hall of the city of Volos is burning. Earlier, people had stormed the local tax office, destroying plenty of documents inside.
00.14 A demonstration has only just started in the city of Athens, with people roaming through the city’s streets and the police tucked away in the sidestreets.
00:07 Demonstrators attacked the Exarcheia Police station a few minutes ago.
23:45 Smoke from tear gas and burning buildings has covered central Athens. Clashes are still going on and the streets are full of people. Earlier, a lot of demonstrators tried to attack the house of the former Prime Minister Costas Simitis in the upper class district of Kolonaki (Anagnostopoulou st.)they clashed with the police units guarding the house.
Earlier a group of demonstrators tried to invade Acropolis police station. The police officers managed to protect the police station but several of them were injured while police vehicles in front of the station were burnt.
Early in the afternoon a DELTA motorcycle police unit, was trapped by demonstrators: people held a rope across the street throwing down the speeding motorcycles.
23.10 GMT+2 It is entirely impossible to estimate the number of people who have taken to the streets in Athens tonight. They are definitely in the hundreds of thousands – there are simply people everywhere.
23.07 GMT+2 The building of Marfin bank (the same building where three bank workers died on May 5, 2010) has been burnt to the ground.
23.05 GMT+2 A gun shop in Omonoia, Athens, has been looted.
23.02 GMT+2 Information about the alleged occupation of the town hall is confirmed: a group of people entered the building, only to be evicted and arrested by riot police a few minutes later.
22.42 GMT+2 The town hall of Athens has allegedly been occupied.
22.40 GMT+2 Police attack and cut off people in the Law school. At least 200 people are trapped inside.
22.30 GMT+2 At least 20 demonstrators and another 30 police have been injured during the day’s clashes.
Source: From the Greek Streets
Posted by nickglais on 2/12/2012 03:11:00 PM