Jan Myrdal speaks in Ludhiana in Punjab “The world over the communist and social democratic movements failed for the communists lost touch with the grassroots level.” 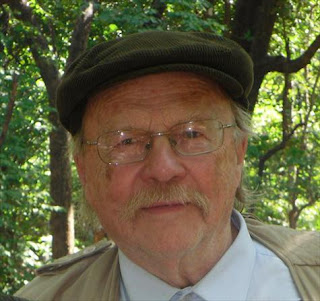 Well known Swedish author and radical Leftist Jan Myrdal said today, “The world over the communist and social democratic movements failed for the communists lost touch with the grassroots level.”
Myrdal was in the city on Wednesday. He addressed a packed hall at Punjabi Bhawan and was invited to the city by the Shaheed Bhagat Singh Vichar Manch.
Myrdal, who is the son of social democrat Alva Myrdal and Nobel Laureate Gunnar Myrdal said, “I joined the communist movement when I was just 15 years old but have broken away from the because the communists made some historical mistakes and even the language that they speak now is that of welfare states. Compromising their positions with capitalists let the left in completely.”
A die-hard Maoist, Myrdal adds, “Take the example of Sweden and France sending their armies to Afghanistan and Iraq. Moreover, in the recent past what we are seeing is that the Left leaders of today are rising and earning much higher than what a party worker does. These leaders have not grown with the cadre but away from the cadre and hence the movements failed. The youth has lost its romanticism with the left and so have the people.”
The writer, who is strongly opposed to curtailing of free speech, is hopeful of “some change when I see trade unions still working and even movement like the Occupy Wall Street. However these movement lack direction and leadership. So while because of all the media hype and fact that movement like Occupy Wall street has caught the imagination of youth world over and the state cannot simply crush it like it did in the past yet these movements are not that large that they can bring about a change that is needed.”
Source Indian Express
Posted by nickglais on 2/11/2012 10:26:00 AM