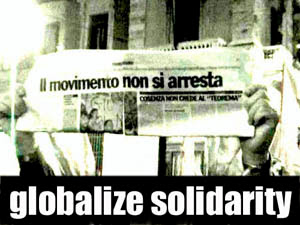 The Italian State has decided to attack leading forces of the resistance to austerity in Italy, and especially those forces that are in some way independent of the 'official left', what in Italy was called the 'autonomous' and which included Anarchists and Maoists and others who did not support the 'official' Communist party. These attacks are significant, as Italy is a European country, and what happens in Italy may well be a testground for what happens here- ie the criminalisation of the part of the radical left that is independent of the 'official' left, the trade unions and the Labour Party.

Comrades Giuseppe Maj, Pietro Vangeli, Giuseppe Czeppel, Manuela Maj, Massimo Amore, Marco Proietti Refrigeri, Paolo Babini, members of the (n) PCI, of the CARC Party or of the Association of Proletarian Solidarity are being put on trial in Bologna on the 8th February accused of “subversive association for purposes of terrorism”(item 270 bis of Penal Code),a law introduced by Mussolini and the fascist regime which imprisoned hundreds of Anarchists and Communists including Antonio Gramsci and Errico Malatesta. oddly, the big government 'rifondazione communist party', a kind of equivalent to our Labour party, have been silent on this.

however, sectarian differences is not the point, but rather see who they are coming for and for whom they are going to target next. if now they go for the Maoists and autonomists, then who next? it would not surpise one too much to see there is an attempt to criminalise anarchism in the UK ( metropolitan police asked people to shop in anarchists!); that these types of laws must be combated in their very beginning before it really will be too late.

We hope that some will come to protest the arrest of the above mentioned comrades under this fascist era law at the Italian Embassy on the 8th February.
matholicus catholicus
Source: http://www.indymedia.org.uk/en/2012/01/491608.html?c=on
Posted by nickglais on 2/02/2012 02:32:00 PM