Message of solidarity on the anniversary of People's War in Nepal 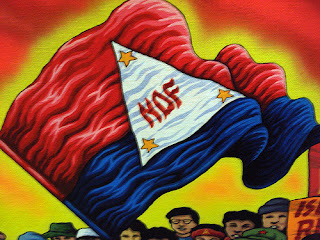 
On behalf of the Communist Party of the Philippines (CPP), the New People's Army and on its own behalf, the National Democratic Front of the Philippines (NDFP) convey warmest congratulations and greetings of comradeship and solidarity to the heroic Nepali people, the United Communist Party of Nepal (Maoist) and the People's Liberation Army on this anniversary of the launching of People's War in Nepal.

Together with revolutionary, anti-imperialist and progressive organizations throughout the world, the CPP and NDFP join in commemorating this historic event. We have followed and been inspired by the outstanding achievements of the Nepali people led by their proletarian revolutionary party: numerous successful offensives of the People's Liberation Army, significant gains in agrarian revolution benefiting millions of peasants, the setting up of organs of political power and stable guerrilla bases, recognition of the rights and dignity of the indigenous peoples, and achievements in the organization of women and youth.


As the United Communist Party of Nepal (Maoist) and the heroic Nepali people persist in their revolutionary path amidst the complexities and new challenges in the current situation, we are confident that the revolutionary struggle in Nepal will win ever greater victories which will be of lasting benefit to the Nepali people. Such revolutionary victories will also redound to the benefit of other oppressed and exploited peoples in their struggle for national and social liberation, and help in building a powerful international anti-imperialist and socialist movement.


Long live the revolutionary struggle of the Nepali people led by the United Communist Party of Nepal (Maoist)!


Long live the revolutionary solidarity between the Nepali people and the Filipino people!


Long live the international solidarity for building a powerful anti-imperialist and socialist movement!
Posted by nickglais on 2/14/2012 01:13:00 PM