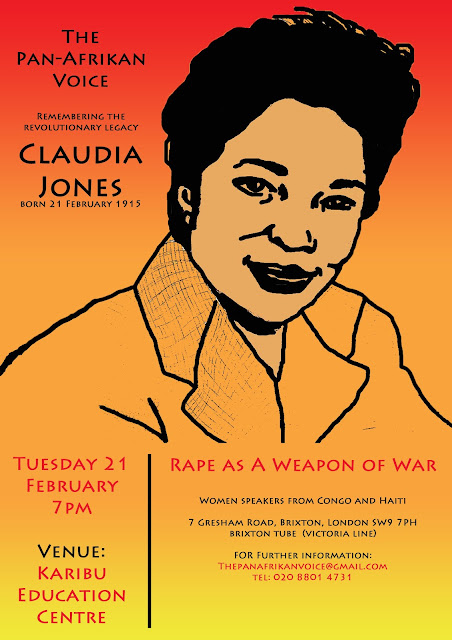 Claudia Jones, Pan Afrikanist, revolutionary Communist, and mother of the Notting Hill Carnival was born in Trinidad on 21 February 1915. She emigrated to USA at a young age but was imprisoned as a result of her political activism and deported to Britain in 1955 where she continued to organise fight for socialism.

Meeting to commemorate Claudia’s revolutionary legacy will be held at 7.00 pm on Tuesday 21st February 2012 (details above). Speakers from Congo and Haiti plus showing of film Poto Mitan: Haitian Women, Pillars of the Global Economy.

Currently in Congo there is a genocide taking place. Over the last decade over 6m people have been killed in a proxy war as transnational companies vie to control the vast mineral deposits of the country. Over the same period 800,000 women, children and men have been raped. The current President Kabila has lost legitimacy in the eyes of many Congolese who are calling for him to go. Women are fighting back against the grotesque violence they are facing and playing a leading role in resistance to the Kabila regime.

As Haiti marks the second anniversary of the earthquake which took 300,000 people’s lives, one of the world’s worst humanitarian disasters, 600,000 people still live in tents. Only a fraction of aid money collected has reached the Haitian people who are under UN occupation. Ravaged by cholera (brought in by UN troops) over 600 have died from disease. The situation is further compounded by an epidemic of rape against women. Like the Congo, Haitian women are organising to fight back against this kind of warfare and brutality.
Also Remembering Malcolm X  Bro Malcolm was assassinated on 21 February 1965 it coincides with Comrade Claudia birth date.
Secondly he was born on 19 March - speech and message for today here :