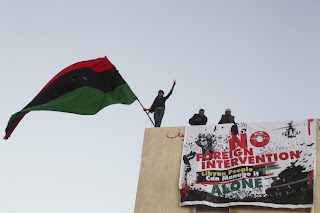 Democracy and Class Struggle fully endorses this statement from Canadian Comrades, it is one of the best statements produced on the Libyan Situation and we are pleased to publish it.


Statement from the General SecretaryMarch 13, 2011The Imperialist Intrigues Against LibyaExpose and oppose all designs against the Libyan PeopleGaddafi’s relationship to imperialismIn stark contrast to the manner in which the Western imperialists haveresponded to developments across North Africa and the Middle East overthe last two months, for the armed opposition in Libya they have beenonly too ready to support the anti-Gaddafi movement. For all theirclamoring about the necessity for “peaceful transitions” where themasses threatened their clients in Tunisia, Egypt, and elsewhere, theimperialists have abandoned their pacifist demagogy when it has cometo Libya. NATO is pushing for a military assault against Libya thatcould range in devastation anywhere from NATO’s operation againstKosovo in 1999 to the invasion of Iraq in 2003.To be sure, the Muammar Gaddafi regime in Libya is neitheranti-imperialist nor or a defender of the interests of the Libyanmasses. Despite Gaddafi’s support to national liberation movementsthroughout the 1970s and ‘80s, from the late 1990s onwards the Gaddafiregime took the road of capitulation and collaboration, negotiatingits détente with imperialism and sharing in the spoils of astructurally adjusted Libya. UN sanctions were lifted in 1999 and by2006 the US lifted its own sanctions and normalized relations as itlooked to get in on the massive investments opportunities thatEuropean corporations were availing themselves of.In the 2000s, the Gaddafi regime consolidated its status as a strongally of imperialism, becoming a partner in the ‘War on Terror’ andrigorously implementing neoliberal structural adjustment programs inLibya. The amount of foreign direct investments from the Westernimperialists – especially France, U.K., Germany, Britain, Italy, andCanada – have sky-rocketed in the past decade. According to an April2010 report from the Libyan government, over the past ten years 110state-owned companies have been privatized and the same reportpromised to privatize 100% of the Libyan economy over time.The Canadian imperialists, for their part, have made substantialinvestments in Libya in the past few years and want to ensure theprotection of those investments. Among the top companies working outof Libya include Canada’s largest oil company, Suncor and theQuebec-based engineering and construction firm SNC-Lavalin. AmongstSNC-Lavalin’s contracts include the construction of the Benghaziairport, a prison in Tripoli, and the massive Great Man-Made RiverProject.For his opening up to the forces of imperialist globalization in the2000s the Gaddafi regime became tolerable, even celebrated – or atleast so long as his rule was secure. But in the second half ofFebruary 2011, Gaddafi has lost all support from the imperialists.The emergence of opposition forces in Libya has provided theimperialists with the opportunity to reclaim the initiative in theregion’s ongoing developments; restore their image as apparentdefenders of justice, democracy and progress; and re-legitimize thelogic of imperialist meddling in the region. There’s no doubt thatthey view Libya as strategically significant and recognize that thereis a greater share of spoils to be seized.As the popular rebellions of the Middle East and North Africa unfoldedthroughout January and February 2011, the Western imperialistsdesperately struggled to save face in the midst of popular movementsthat revealed just how hated imperialism’s comprador front men reallywere. The toppling of Mubarak served as a huge embarrassment for U.S.policy in the region. Mubarak’s Egypt was second only to Israel as thestaunchest defender of American imperialist interests in the MiddleEast.At first, the imperialists cautioned the masses to exercise restraintand ensure that their resistance would remain peaceful. As thepeople’s movements in various countries advanced and threatened totopple imperialism’s clients, especially in Egypt, the imperialistssaved face by feigning neutrality. When the strength of the people’sstruggles melted away the support for Ben Ali and Mubarak regimes,some of the imperialists even celebrated these developments“Revolutions” (with the subtle implication that it was time to go homeand let the “transition to democracy” work its magic).

In a country with 30% unemployment and 50% youth unemployment, Gaddafi andthe bureaucrat capitalists and compradors have become richer andricher through the period of neoliberal reforms, while the masses havesuffered immensely. The meddling of the imperialists is merely theirattempt to exploit the class contradictions that characterize theopposition to arrive at an outcome even more preferable toimperialism.Revolutionaries in the imperialist countries have the duty to exposeand oppose the role of their own imperialist bourgeoisies in Libya,and the people in the Middle East and North Africa have alreadydemonstrated that the assistance of imperialism is not required to doaway with reactionaries like Mubarak and Ben Ali. As Mao Zedong oncesaid, “All reactionaries are paper tigers”. Mao’s certainty in thetriumph of the people stemmed from his recognition that allreactionaries are divorced or divorceable from the interests of thepeople.The growing waves of protests, strikes, and uprisings by workers andthe broad masses all across the world, conditioned by the generalcrisis of the imperialist world system, reveal that the position ofimperialism is in strategic decline, while that of the proletariat isstrategically improving. Today’s People’s Wars in India and thePhilippines demonstrate that, when led by a genuine communist Party,the will of the people for liberation is inexhaustible. In the comingyears, new People’s Wars will emerge all across the world. Out of theuprisings in North Africa and the Middle East, new and revolutionarycommunist Parties can and must emerge. The imperialists and all theirclients can and must be crushed.Support the people of Libya in smashing Gaddafi and all deals with imperialism!No to imperialist meddling! No to NATO intervention!

Support the struggles of the masses in the Middle East and North
Africa for New Democracy and Socialism!Revolutionary InitiativeMarch 13, 2011.
Posted by nickglais on 3/19/2011 11:55:00 AM