500,000 on the March to Stop the Con- Dem Cuts - Democracy and Class Struggle First Report from London 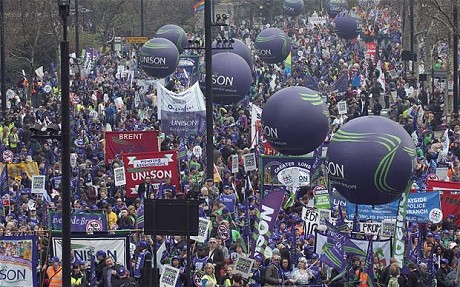 Thousands of Unison members were at the head of the march as it set off at 11.45am - 15 minutes earlier than it was due to start - led by Dave Prentis and carrying giant purple-coloured helium balloons, reports the Press Association.

Scores of people in wheelchairs were also at the front, blowing whistles and carrying banners, some of which called for a general strike.

The protesters will march past the House of Commons before heading for Hyde Park.

Len McCluskey, general secretary of Unite, said he believed there were half a million people taking part in the protest.

"This is an absolutely incredible turnout and display of anger which the Government will have to take notice of."