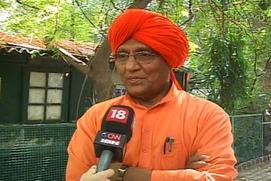 Salwa Judum - a civil militia movement Chhattisgarh launched in 2005 to counter leftist insurgency - has gone out of control, social activist Swami Agnivesh said on Sunday, a day after being attacked by Salwa Judum cadres and special police officers (SPOs) in Dantewada district. "Salwa Judum leaders
which two district officials were transferred.
"Raman Singh should take moral responsibility of all the developments in Dantewada," said the social activist, demanding a judicial inquiry by a sitting Supreme Court judge.
He sought an inquiry in to the developments in Dantewada, including villagers' allegation of police rampage in three villages besides the attack on him.
Agnivesh and media persons accompanying him were assaulted by a mob at Dornapal town in Dantewada district while they were on way to a forested area where policemen allegedly burnt down over 200 huts of tribals recently.
The protesters, including women, stopped Agnivesh's vehicle, pulled him out, manhandled him, threw eggs at him and abused him.
After the incident, the state government ordered the shifting of district collector R Prasanna and Dantewada's senior superintendent of police (SSP) SRP Kalluri.
Sources said that besides SPOs, the cadres of Salwa Judum were brought from various areas to Dornapal to stop Agnivesh reaching the tribal villages hit by the alleged police rampage.
They said that tribal residents of the three police rampage-hit forested villages in Tarmetla area, based some 500 km south from here, were spending nights under the sky after their houses were burnt in alleged police atrocities earlier this month.
Agnivesh was highly critical of Kalluri but symphathised with Prasanna.
"Shifting Kalluri to Sarguja as deputy inspector general (DIG) of police is not enough. He must be placed under suspension," Agnivesh told mediamen.
He said the state government should not have transferred district collector Prasanna because "he was doing a good work in Dantewada though there was a lack of coordination between the SSP and the collector."
Reiterating his demand for holding peace talks with the Maoists, Agnivesh appealed to the rebels to announce a ceasefire to facilitate the talks.
"Violence can't be a solution to this problem," he said.
Dantewada district authorities were making efforts to reach the troubled Tarmetla area to verify a report that bodies of six tribals were found near water bodies at Morpalli village.
They were also trying to check if they might have died due to starvation, a source said
Source:
Salwa Judum has gone out of control, says Swami Agnivesh - Hindustan Times
Posted by nickglais on 3/27/2011 11:02:00 AM