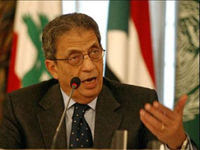 This was first posted on Revolutionary Frontlines - we re-post with their comment on the Arab League story.

[The Arab League, in long-term alliance with EU/US imperialist powers, actually endorsed and thereby facilitated the diplomatic push for the so-called "no fly zone" campaign against Gaddafi in Libya.  Now, the Arab League and others around the world, appear "shocked" to discover that the push for a "no-fly zone" was just a "bait-and-switch" operation -- a cover for imperialist intervention, to control the people's revolt, and to seize oil fields.  "NFZ" thus joins "humanitarian imperialism" as another tarnished tool of mass deception.  Enemies of the people (like Gaddafi) must be dealt with by the people themselves -- not by other enemies of the people (like the various imperialist powers). -- Frontlines ed.]

CAIRO—The Arab League secretary general, Amr Moussa, deplored the broad scope of the U.S.-European bombing campaign in Libya on Sunday and said he would call a new league meeting to reconsider Arab approval of the Western military intervention.
Moussa said the Arab League’s approval of a no-fly zone on March 12 was based on a desire to prevent Moammar Gaddafi’s air force from attacking civilians and was not designed to embrace theintense bombing and missile attacks—including on Tripoli, the capital, and on Libyan ground forces—that have filled Arab television screens for the last two days.
“What is happening in Libya differs from the aim of imposing a no-fly zone,” he said in a statement on the official Middle East News Agency. “And what we want is the protection of civilians and not the shelling of more civilians.”
Moussa’s declaration suggested some of the 22 Arab League members were taken aback by what they have seen and wanted to modify their approval lest they be perceived as accepting outright Western military intervention in Libya. Although the eccentric Gaddafi is widely looked down on in the Arab world, Middle Eastern leaders and their peoples traditionally have risen up in emotional protest at the first sign of Western intervention.
A shift away from the Arab League endorsement, even partial, would constitute an important setback to the U.S.-European campaign. Western leaders brandished the Arab League decision as a justification for their decision to move militarily and as a weapon in the debate to obtain a U.N. Security Council resolution two days before the bombing began.
As U.S. and European military operations entered their second day, however, most Arab governments maintained public silence and the strongest expressions of opposition came from the greatest distance. Presidents Hugo Chavez of Venezuela, Daniel Ortega of Nicaragua, Evo Morales of Bolivia and Fidel Castro of Cuba condemned the intervention and suggested Western powers were seeking to get their hands on Libya’s oil reserves rather than limit the bloodshed in the country.
Russia and China, which abstained on the U.N. Security Council resolution authorizing military intervention, also expressed regret that Western powers had chosen to get involved despite their advice.
In the Middle East, the abiding power of popular distrust against Western intervention was evident despite the March 12 Arab League decision. It was not clear how many Arab governments shared the hesitations voiced by Moussa. But so far only the Western-oriented Gulf emirate of Qatar has announced it would participate despite Western efforts to enlist Arab military forces into the campaign.
The Qatari prime minister, Hamad bin Jassem Al-Thani, told reporters Qatar made its decision in order to “stop the bloodbath” that he said Gaddafi was inflicting on rebel forces and civilians in rebel-controlled cities. He did not describe the extent of Qatar’s military involvement or what the mission of Qatari aircraft or personnel would be alongside U.S., French and British planes and ships that have carried out the initial strikes.
Islam Lutfy, a lawyer and Muslim Brotherhood leader in Egypt, said he opposed the military intervention because the real intention of the United States and its European allies was to get into position to benefit from Libya’s oil supplies. “The countries aligned against Libya are there not for humanitarian reasons but to further their own interests,” he added.
But the Muslim Brotherhood and its allies in the Youth Coalition that spearheaded Egypt’s recent upheavals took no official position, busy instead with Saturday’s referendum on constitutional amendments designed to open the country’s democracy. Similarly, the provisional military-run government took no stand and most Cairo newspapers gave only secondary space to the Libya conflict.
When the Arab League approved imposition of a no-fly zone, only Syria and Algeria opposed the league’s decision, according to Egyptian officials. The Syrian Foreign Ministry on Thursday reiterated Syria’s opposition, as diplomatic momentum gathered for the U.S.-European operation.
“Syria rejects all forms of foreign interference in Libyan affairs, since that would be a violation of Libya’s sovereignty, independence and the unity of its land,” it said in a statement.
Al Qaeda, which could be expected to oppose foreign intervention in an Arab country and embrace Gaddafi’s qualification of the campaign as a new crusade, made no immediate comment. This likely was due in part to the Qaeda leadership’s difficulty in communicating without revealing its position. But it also was a reminder of Gaddafi’s frequent assertions that Al Qaeda was behind the Libyan revolt and that he and the West should work hand-in-hand to defeat the rebels.
Iran and its Shiite Muslim allies in Lebanon’s Hezbollah, reflexively opposed to Western influence in the Middle East, also were forced into a somewhat equivocal position, condemning Gaddafi for his bloody tactics but opposing the Western military intervention.
“The fact that most Arab and Muslim leaders did not take responsibility opened the way for Western intervention in Libya,” declared Hassan Nasrallah, the Hezbollah leader, in video speech Sunday to his followers. “This opens the way for foreign interventions in every Arab country. It brings us back to the days of occupation, colonization and partition.”
At the same time, Nasrallah accused Gaddafi of using the same brutality against his opponents as Israel has used against Hezbollah in Lebanon and Hamas in Gaza.
The Iranian Foreign Ministry, which previously criticized Gaddafi’s crackdown, on Sunday expressed “doubts” about U.S. and European intentions. Like the Latin American critics, it suggested the claims of wanting to protect civilians were just a cover for a desire to install a more malleable leadership in Tripoli and make it easier to exploit Libya’s oil.
Gaddafi has been on the enemies’ list of Shiite activists in the Middle East since 1978, when Lebanon’s paramount Shiite leader, Imam Musa Sudr, disappeared during a fund-raising visit to Tripoli. His fate has never been officially cleared up but Palestine Liberation Organization investigators determined that he was probably killed by Gaddafi’s security agents after they misunderstood an order from Gaddafi to “get rid of” Sudr and his pestering for money.
codyej@washpost.com
Posted by nickglais on 3/21/2011 03:24:00 AM