Len McCluskey, general secretary of Unite, told the protesters they were bearing witness to services closing, old people going without care, libraries, swimming pools and parks going to "ruin" and young people heading for a life on the dole.
"But you represent a spirit of resistance in every workplace and community that says we are not going to have our way of life killed so that the rich and greedy can live as they please."
Mr McCluskey said that every time Deputy Prime Minister Nick Clegg stepped out of doors it cost police £2 million to protect him, adding: "We cannot afford that any more - if you were to go on a national tour we'd be bankrupt."
The unite leader attacked the Government's "assault" on the NHS, warning ministers that privatising the health service would spark the same protests as those against the poll tax when Margaret Thatcher was Prime Minister.
He also urged Labour MPs to hold the Government to account rather than simply waiting for the next general election.
Brendan Barber, general secretary of the TUC, told the rally that today was just the beginning of the campaign.
"We will fight the Government's brutal cuts in our workplaces and our communities.
"Today we are speaking for the people of Britain, and David Cameron, if you want to meet the Big Society - we're here in Hyde Park. It's time you started listening."
Michael Leahy, general secretary of Community Union and TUC president, said: "Today is a great day of unity and solidarity. People have come from all over the UK with one simple message for Osborne, Clegg and Cameron: There is an alternative.
"Today has also brought back many painful memories for me - it reminds me of the eighties. The Tories have resurrected TINA - there is no alternative.
"But I fear it's not just TINA that is back from the 80s. It's the same old Tories - who still think unemployment is a price worth paying. That price was 18 years of misery and hardship wreaked on working people." 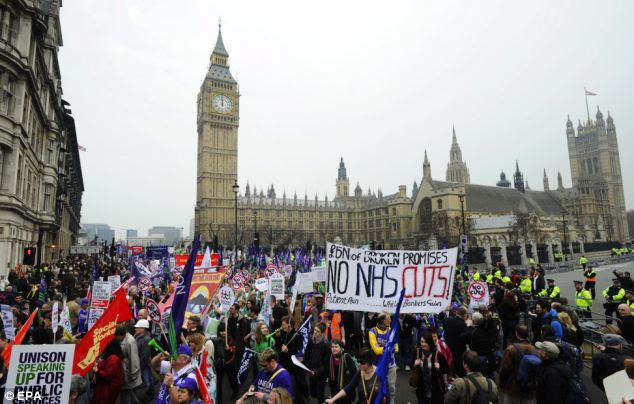