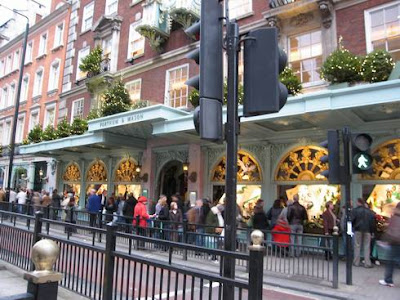 Police have kettled thousands of protesters in the Piccadilly area, surrounding Fortnum & Mason.
"The police line is advancing from the direction of Arlington Arcade towards Piccadilly. There must be thousands of people contained, and charging towards Piccadilly."
"About twenty protesters have clambered onto the balcony at department store Fortnum and Mason on Piccadilly. They climbed up railings on the outside, while others burst into the store and emerged from first floor windows. Alarmed staff took refuge on the second floor, looking down at the dramatic scenes a few feet below.
Signs were daubed on the walls including slogans "tax the rich" while banners singled out Vodafone, Boots and Top Shop - popular targets of the anti-tax evasion group UK Uncut."
LATEST UPDATE 20.44pm
Outside Fortnum & Mason, where the trouble flared, about 40 protesters were arrested.
They have been lined up at the side of the building,  handcuffed and being searched by officers.
Six premises had windows smashed.
They include the banks Santander, Lloyds TSB and Pret a Manger
Posted by nickglais on 3/26/2011 10:27:00 AM