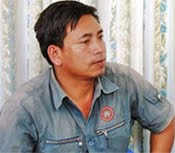 Maoist People's Liberation Army chief Nanda Kishore Pun 'Pasang' has refuted government claims that large number of UN verified PLA combatants have left the cantonments, claiming that only a fraction of them have done so.

Speaking to a local radio station on Friday, Pun said that only around 50 to 55 of the verified combatants have lefts the camps. He said some of the combatants left the cantonments because they had met with accidents while some left because of personal reasons and few have died.

Pun also said that they have been regularly briefing the government about the situation of combatants and their numbers through UNMIN. The remark from the senior PLA chief comes at a time when the government has been asking UNMIN to provide the actual number and other latest details about PLA combatants, suspecting that many of the 19,000 plus combatants are absent from the cantonments.

In a meeting with Prime Minister Madhav Kumar Nepal on Thursday, UNMIN chief Karin Landgren expressed willingness to provide the "latest information" on the PLA combatants to the government, but reportedly turned down the request to provide the actual number of the combatants living in the cantonments, saying that it was beyond the mandate of her office.

Speaking to journalists in Dang on Saturday morning, Mahara claimed allegations clamped on UNMIN are the reflections of Indian interests. He added, India wants its bigger role in Nepal’s politics by ending UNMIN presence here.