KOE salutes the demonstrations, condemns the police attacks, calls for even stronger mobilization against the anti-people government measures 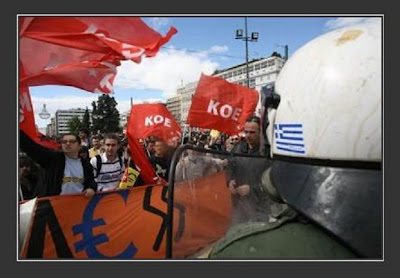 The Communist Organization of Greece (KOE) salutes the combative mass demonstrations that took place yesterday afternoon and today morning all over the country against the new measures adopted by the government of PASOK. These demonstrations must become the starting point of a great uprising of all the workers and of the whole people, obliging the government to pay dearly its effort to impose the barbaric measures imposed by Brussels. Today the Greek people, demonstrating in their dozens of thousands with such an impressive and militant way, send a clear message to the government: The new anti-people measures will go, or this government will go!

The Communist Organization of Greece condemns the coward attack of the special police forces against Manolis Glezos, the 87 years old Hero of our National Resistance against the Nazi Occupation, outside the entrance of the Parliament, which resulted to his injury and hospitalization in Intensive Care Unit. Seven decades after his legendary and symbolic blow against the Nazi Occupation (*), Manolis Glezos is aggressed by the political servants of Brussels and Berlin!

The Communist Organization of Greece also condemns the unprecedented attack of the special police forces against the Parliamentary Group of SYRIZA (Coalition of Radical Left) while the MPs were coming out of the Parliament with their own banner in order to meet the demonstrators. The out of limits behavior of the police forces corresponds very well to the equally out of limits economic and social suffocation imposed on the country by the government of PASOK.

The Communist Organization of Greece denounces the provocation set up in common by the parliamentary speaker of PASOK Christos Papoutsis and by Adonis Georgiadis, MP of the extreme right-wing party LAOS, who targeted KOE and SYRIZA as responsible for the attack of demonstrators against Yiannis Panagopoulos (president of the General Confederation of Labor). This orchestrated attack against KOE and SYRIZA proves that the extreme right-wing LAOS supports the government of PASOK both in the Parliament (**) and in provocations.

It is very well known to all that KOE has a radically different political line than the one followed by the leadership of the General Confederation of Labor – especially today that the workers become the subjects of the wildest attack ever perpetrated by the ruling classes and their governments. But it is also equally very well known that KOE puts in practice this political line as the Left always did: massively and politically, in the working places and in society.

It is shameful that, the very day that PASOK and LAOS bury in the Parliament the conquests of a whole century, the same parties, these shameless representatives and puppets of Brussels, hasten to cover their huge responsibilities with such cheap tricks and provocations against KOE.

The Communist Organization of Greece calls to even bigger and more combative mobilizations. Today we gave a battle, but the struggle continues. Everyone to the streets, until the government’s measures will be cancelled and until the EU Stability Pact will be abolished!

(*) On May 30, 1941, Manolis Glezos and Apostolos Santas climbed on the Acropolis and tore down the Nazi Swastika, which had been there since April 27, 1941, when the Nazi forces had entered Athens. That was the first resistance act that took place in Greece, and probably among the very first ones in Europe. He passed 16 years in prisons and in exile, persecuted by the reactionary post-war regimes of Greece.

(**) The new measures were approved today in the Parliament, under a “special urgent procedure” that lasted a few hours, with the votes of the MPs of PASOK (government party) and LAOS (extreme right-wing party).
Posted by nickglais on 3/05/2010 12:40:00 PM