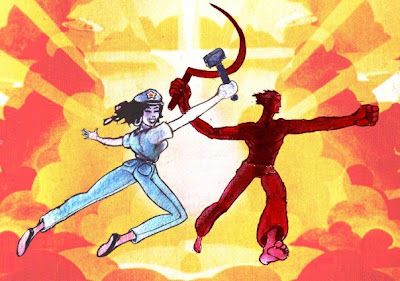 On March 20th, media published the news that com. AZAD, Spokes Person of CPI(Maoist) was arrested and there was a demand for his release. The information was passed on from DK Special Zone committee’s spokes person com. Gudsa Usendi and Com. Pratap, spokesperson of Central Regional Bureau of our party.

Com. Azad is safe. The information that he was under illegal detention was incorrect.

Com. Azad was supposed to meet com. Shakamuri Apparao @ Ravi in somewhere in Maharashtra. After learning the news of the martyrdom of com. Apparao, Azad did not reach there. Since he could not give feedback to the concerned comrades why he did not reach, there was this confusion. It is natural to get suspicion in the present conditions that Azad was under illegal custody of the notorious APSIB. Com. Shakamuri apparao and com. Kondal Reddy were caught in Chennai and Pune respectively and were killed in cold blooded fashion. Chidambaram knows their arrest and gave a go ahead to this brutal and fascist extra judicial killing.

It was genuine mistake from our Central Regional Bureau and DK Special Zonal Committee.

The incorrectness of the statement occurred owing to the conditions we are in.

In fact, com. Azad sent his replies to Chidambaram’s rubbish on “truce and talks” to media on 12th March. Unfortunately media has not covered.

We request the media to give ample coverage to this information to dispel the confusion. We leant that com. Azad mother had already submitted a memorandum to AP State Human Rights Commisson.

We extend our thanks to the organizations who responded with great concern to the news of arrest of com Azad and demanding his release.