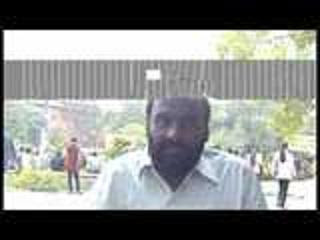 G.N. Saibaba is Assistant Professor of literature at Delhi University. He is one of the most vocal voices of the democratic opposition. He has played an important role in bringing together the most diverse trends against the ruling elite. Saibaba represents the Revolutionary Democratic Front (RDF).

The application of globalisation policy in India meant benefits first of all for the ruling oligarchy. A handful of families are in full control of the levers of power. Thanks to their position they could amass huge fortunes, particularly in the last twenty years. Eventually among the list of billionaires there are a lot of Indians. The concentration of wealth has been growing rapidly while some 80% of the population has to live on less than half a dollar a day and can hardly afford a daily meal. According to the government’s own statistics this was not the case two decades back. India pursued globalisation policies in the most aggressive way, as there are vast untouched resources available on which the western powers and especially the U.S. want to get a hold. But huge poverty also evokes huge conflicts. In the last six years we entered a new phase called “Second Generation Reforms”.

Q: What is the difference to its predecessors?

The first phase was marked by the liberalisation of the economy and the legal framework. It was mainly based on the IT sector. But there was little foreign investment. This has been changing. Several hundreds of memoranda of understanding (MOU) with multinational corporations (MNC) have been signed, mostly related to the exploitation of natural resources. Mainly in central and eastern parts of India there are enormous deposits of iron ore, coal, bauxite, limestone and other minerals the western powers want to tap. Thus incredibly huge swathes of land are being awarded to the MNCs.

We are faced with an unprecedented sell-out of land, forests, minerals and water which did not even happen under British colonialism. So the last half decade also saw growing resistance by the people against land grab, Special Economic Zones (SEZ) and industrialisation projects. Given the intransigent reaction of the elites these often turn violent and armed – with or without leadership.

Q: What is the impact of the world economic crisis?

India cannot keep the crisis outside, unemployment has grown and huge job losses are continuing. Some five million workers lost their employment (as many as in the U.S.) and the textile industry virtually collapsed. Actually the middle classes are bearing the brunt of the crisis, while the upper middle classes can no more dream of a western-type comfortable life. It is the first time that the service sector’s white-collar employees are affected, such as in IT. In Gurgaon [a suburb of Delhi were such industries are concentrated] engineers for the first time joined strikes of production workers.

There are also signs that working-class and peasant struggles are coming together. For the first time since 60 years we see a reversed pattern of migration. People are leaving the towns and returning to the countryside. But there is nothing left in rural India, though they cannot survive in the town either. Nowhere a source of livelihood remains. The agricultural sector is shrinking, despite the fact that some 60% of the population depend on it. India’s food security got lost which has been built in the last half century.

The promised investments for industrialisation are hardly flowing in, though agreements are being signed. Therefore popular protests are breaking out both in rural as well as in urban areas. Clashes in the streets erupt. Fortunately there is a revolutionary movement which can help organising the spontaneous turmoil caused by the crisis.

There is a great potential for the revolutionary forces to grow in the present phase, as the brutal impact of the crisis pushes people to struggle against the system.

Q: Can you draw a first balance sheet of the military campaign “Green hunt” launched by the Indian army in the last autumn against the Adivasi resistance to evict them from their ancestral lands?

The operation is entering its fifth month and it is a full scale war with some 250,000 soldiers and U.S. military logistics involved. But there are no visible signs of success. Hundreds of innocent civilians are being killed, as well as ordinary soldiers, often from outside the region, who do not understand the local language let alone the political background of the conflict. As the governmental forces do not advance, they choose soft targets and commit atrocities.

They have been suffering severe blows from the Maoist movement, who could kill some high-level targets. Motivation of the troops is plummeting.

Q: What about the reaction in the cities, especially among the educated middle classes?

The middle classes are slowly acquiring consciousness. But a polarisation is under way, as the picture is changing day by day. The opposition against Green Hunt is growing and a big upheaval is not far away. The government cannot go ahead with this attack on the fast track and had to slow down. As a matter of fact, most of the big mining and industrial projects are stalled due to the popular resistance.

The press happens to speak of a “terrorist threat” also in India. The American policy is being copied in India and used against any serious opposition. The army is sent even against ordinary demonstrations. The Muslims are collectively stamped as terrorists and the same with the Adivasis (Indian native people). Also the Dalits (untouchables).

The U.S. ideology is excessively used by the Indian elite. In 2008 they installed the Unlawful Activity Prevention Act which is almost a replication of the earlier draconian Prevention of Terrorist Activities Act. By law, Maoism is now equated with terrorism. Also targeted are all Muslims, as well as the liberation movements of Kashmir and the Northeast.

Q: You yourself are accused by the police to be a decisive aide to the Maoists.

In the last months the government tried to implicate me with banned organisations, as I participated in the campaign against the ban on the Communist Party of India (Maoist) [CPI(M)]. Actually the concrete accusations are all together laughable. How can I participate in a tactical counter-offensive or give shelter to central committee (CC) cadres? They say that I am broadening the base of what they call “outfight”, that my views are considered by the CC of the Maoists. In this way they can make me responsible for anything which is happening in India.

They accuse me of my views and political stand. This is part of a larger plan to silence the voices of democracy and the opposition to the anti-people policies of the government. They fear the growing criticism to their military campaign against the poorest of the poor, stripping them of their land and its resources.

Today they want to shut my and others mouths, tomorrow all democratic voices. First they banned resistance organisations, which is wrong in itself. Now they try to burn the surroundings. But civil society has come out and condemned the government for the vilification. A whole series of press conferences and public protests with high ranking personalities are in the making.

Q: Eventually on geopolitics: some think that India could join a future bloc together with China and Russia in favour of a multi-polar global system.

India has become the U.S.’s main ally in the region. I do not see any condition in the foreseeable future that this could change. The elites here are completely subservient to Washington and the tendency is worse and worse.
Posted by nickglais on 3/17/2010 02:33:00 PM