Lalgarh leader gets bail in 26 cases 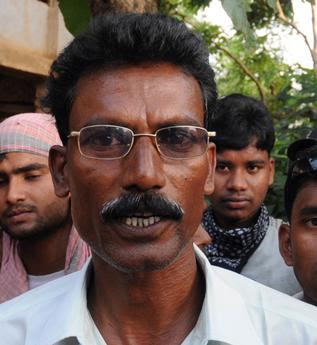 This article appeared in India Today on March 9, 2010.

Kolkata: Six months after Maoist-backed People’s Committee Against Police Atrocities (PCAPA) leader Chhatradhar Mahato was arrested by the West Bengal Police, he has got bail in 26 of the 29 cases against him.

He was arrested on September 26 during an agitation against police atrocities in Lalgargh and was booked under the Unlawful Activities Prevention Act (UAPA). After framing charges, including murder, arson and threat to national security against him, the police failed to back the charges with evidence.

Defence counsel Kaushik Sinha said Mahato had managed to get bail in 13 cases on December 15. The additional chief judicial magistrate of Jhargram court refused to take note of the chargesheet submitted in a case pertaining to sedition on technical grounds. ”We managed to secure bail for him in 13 other cases when he was produced in court recently. His bail in most of the cases proved he was framed by the police. The court discharged him in 26 cases,” Sinha said.

Association for Protection of Democratic Rights leader Sujato Bhadra said: “Out of 29 cases against Mahato, only three – including the UAPA charge – is pending against him. We are planning to move high court in the three remaining cases.” It is very unfortunate that as he kept getting bail in cases, the investigators slapped additional charges against him to keep him in custody,”he added.
The Maoists said on Monday, contrary to media reports, they did not expect talks with the Centre to take place soon. They claimed to be preparing for an escalation of violent engagement with security forces across the country.

Maoist politburo member Kishenji said though the CPI (Maoists) had responded to the Centre’s offer for talks, the party was not convinced about the government’s sincerity. “The Centre is not sincere in its offer. Actually they don’t want to talk. They think they can eliminate us. They are wrong,” he said over telephone.

Asked about his counter-offer of a 72-day ceasefire as a precondition for talks, Kishenji said: “Our offer shows we are sincere. We have been able to prove it is the government and not us, which is not interested in talks. “Kishenji had earlier told a section of the media that his party wanted author Arundhati Roy, social activist B. D. Sharma and Trinamool Congress M. P. Kabir Sumon as possible mediators for talks between the government and the Maoists. While Roy had declined, Sharma and Sumon said they were ready to act as mediators.

In a related development, in Saluka village in Bankura district, Golok Duley, son of a school teacher and local CPM leader Ranjit Duley who has been abducted by the Maoists, held a press conference urging the state government to free eight cadres to secure his father’s release.
Posted by nickglais on 3/12/2010 11:16:00 AM