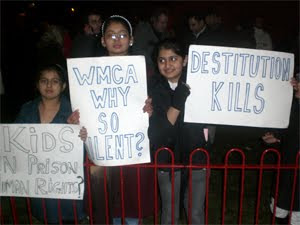 On the morning of Sunday 7 March, the bodies of Serge Serykh and his wife and stepson were found at the bottom of a 30-storey tower block on Petershill Road, north Glasgow, used by the YMCA to house asylum seekers. The Russian family had apparently committed suicide by throwing themselves off the 15th floor balcony. Since the deaths were announced, the police and the BBC have repeated like a mantra that there were ‘no suspicious circumstances’. But there clearly are ‘suspicious circumstances’ surrounding these tragic deaths, and the prime suspects are the British Labour government and its punitive immigration policies.

Neighbours told Unity (the asylum seeker support group) that Strathclyde police visited the family’s flat last Friday to tell them their asylum application had been refused and that they would be evicted. Generally, the police only come to the door of refused asylum seekers at the request of the landlord after the family have refused to leave. The landlord in this case, the YMCA, has a history in Glasgow of colluding with the state to attack asylum seekers
(http://tiny.cc/aDgpi).

The use of dawn raids to pick up asylum seekers for deportation has sown fear amongst entire communities. Last year Eritrean Ledia Tewelde broke both legs and fractured her back jumping from her Glasgow flat, after fearing a bang at the door was Home Office officials coming to deport her. An asylum seeker from Guinea living on the same estate as the Russian family, told the Independent: ‘99 per cent of people here live in fear of being deported. Every day the threat is here because the Home Office are bullies – they treat us like animals.’ Over 50 asylum seekers have committed suicide in Britain over the last ten years, including a woman from Azerbaijan who in 2006 jumped from her 11th storey flat in Knightswood, Glasgow as police and mental health officials battered down her door.
(http://tiny.cc/V0XYi)

The conditions in the Red Road tower blocks have long been appalling. Built as some of the highest council flats in Europe in the 1960s in an attempt to deal with Glasgow slum housing, the estate was run into the ground by successive Labour councils, as the destruction of industry in north Glasgow cost tens of thousands of jobs, heroin flooded the area and Springburn became one of the poorest, most deprived areas in Britain. Glasgow City Council signed up to asylum seeker dispersal scheme in 2000 and housed asylum seekers on destitute estates where no social provision or investment for local residents had taken place for years. Racism was rife and in 2001 Kurdish asylum seeker Firsat Dag was murdered on his way home to nearby Sighthill (http://tiny.cc/rO6Gv). The block the Russian family were living in has been due for demolition for years, lying derelict and half-empty; Robina Qureshi of Positive Action in Housing described the flats as ‘damp, run-down, awful places to live in…depression hell-holes.’

Glasgow has long been a centre of resistance by asylum seekers. The Red Road flats and the YMCA in particular have seen asylum seekers and residents organise resistance to dawn raid snatch squads. Locals and asylum seekers have already come together following this latest tragedy, with FRFI supporters attending both the vigil which took place on the estate on 9 March, and a protest the same day outside the Home Office Immigration Removal Centre. FRFI supports all action against the segregation and destitution of asylum seekers, against immigration controls and for real social provision for the whole working class.

UPDATE: There will be a march to commemorate the deaths in Red Road and demanding justice for asylum seekers on Saturday 13 March, assembling at 11am at the YMCA on Petershill Road and ending in George Square. Join FRFI supporters on the march to demand justice now