Jharkhand : The hunt is on 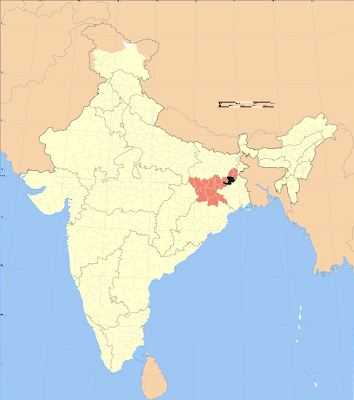 Map of location of Jharkhand on Map of India

Jamshedpur/Ranchi, March 10: Amid a silent build up of forces in various red bastions of the state, DGP Neyaz Ahmed has said that joint anti-Naxalite operations with Bengal were on since Sunday in the Ghatshila sub-division of East Singhbhum, the confirmation coming on a day a huge cache of deadly explosives were seized in Bokaro.

Ahmed said internal operations had been launched simultaneously and included the Saranda forests in West Singhbhum and the hilly terrain of Jhumra in Bokaro.

"The operation has started in three places and we will shortly extend it to new fronts," he told The Telegraph.

"But before moving into new fronts, we want to have breakthroughs," he said, adding that 25 companies of paramilitary forces, including CRPF and Cobra commandos, had been pressed into service. Choppers and anti-landmine vehicles were also being used extensively.

CRPF special DG and commander of the anti-Naxalite task force Vijay Raman held a meeting with Ahmed today in the state capital, while IG (operations) D.K. Pandey, who is heading the operations in the state, spent the morning in Jamshedpur.

"Our forces have entered the deep forests and destroyed Naxalite hideouts and recovered arms and ammunition and cash of around Rs 4.5 lakh from Bokaro," Ahmed said.

Being carried out along with the Bengal police, the operation, the DGP clarified wasn't a one-day affair. "It has to be a continuous process and we will take some time to flush out Maoists. But one thing is clear - that the Maoists are on the backfoot," he maintained.

Though the operations had been launched at the beginning of the week, the police top brass chose to keep it a secret. Two choppers, one belonging to Indian Air Force (IAF) and the other to Border Security Force (BSF), have been engaged for aerial survey and ferrying personnel.

The choppers, being used primarily in Saranda and Ghatshila, are refuelling at Sonari aerodrome that has now been converted into a high security zone.

Police sources revealed that around eight companies of paramilitary forces had been deployed in the Ghatshila sub-division and an equal number pressed into service at Saranda and Jhumra pahar in West Singhbhum and Bokaro districts, respectively.

The jawans who had been deployed, the sources added, had been specially trained to fight Maoists in extreme conditions and were carrying out long-range patrolling along with random raids in jungles.

Additional paramilitary forces were on standby in camps set up at Ghatshila and Chaibasa.

According to Pandey, the police and paramilitary forces destroyed a rebel camp at Bandhgaon in Saranda on Tuesday after receiving an intelligence input that dreaded Naxalite leader Kundan Pahan was hiding there.

So far, Maoists have not challenged the forces carrying out flushout operations in the forests. "It might be a Maoist strategy not to be locked in direct fights with the police when all the other neighbouring states of Bengal, Chhattisgarh and Orissa have mounted an offensive against them," reasoned a police official.