Either the government will sink, or the society will! Communiqué of KOE 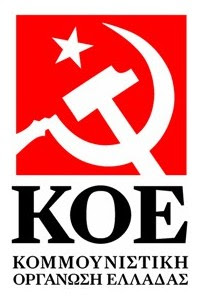 Communiqué of the Communist Organization of Greece on the new anti-people measures adopted by the Greek government [*] - March 3, 2010

After the prime minister delivered, yesterday, a hypocritical and cheap speech about “our fatherland” which is at war with “bad guys” who steal the public wealth (!), today he ordered the government’s spokesman to proceed to the most nightmarish statements ever heard by the working people.

The Papandreou government sinks the country. They confiscate the salaries and pensions. They steal our income through exorbitant taxation. At the same time, they don’t take even 1 euro more than before by the rich. They don’t cut back even 1 euro on the military expenses and armament orders. They don’t ask even 1 euro more from the banks, the biggest robbers of the people. The Papandreou government succeeded, in a very short time, to become even more antipopular than the much hated right-wing governments of Mitsotakis and Karamanlis.

Never before, during the whole post-war era, so much lies were told in such a short time span. The Papandreou government, after giving up the power to the money-markets and to Brussels, now behaves as Berlin’s Gauleiter. The government had the possibility to borrow money with lower interests; to tax the big capital; to exact support from Brussels; to defend the already exhausted and impoverished society. Instead, the Papandreou government chose to be applauded by the Financial Times, Goldman Sachs, Frau Merkel and Mister Baroso. And, as today’s statement by Merkel shows, the liquidation of the Greek people will take place without any financial compensation by the EU
Posted by nickglais on 3/04/2010 11:46:00 AM