The German Freikorps troops captured Rosa Luxemburg, Liebknecht and some of their supporters. Luxemburg was shot and her body thrown in the Landwehr Canal  in Berlin on 15th January 1919 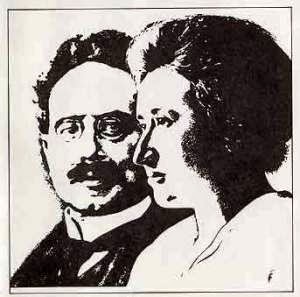 On Sunday, January 12, thousands gathered for the annual commemoration of the murdered by the reaction founder of the Communist Party of Germany, Karl Liebknecht and Rosa Luxembourg, and the great leader of the INTERNATIONAL proletariat, Lenin.

We have participated in the demonstration with its own quota, together with comrades from Norway and Austria, within the Alliance 3A block.

At the beginning and at the end of the demonstration, we sang the anthem of the INTERNATIONAL proletariat, the International. With our slogans "Proletarian feminism for communism",  "The true face of their democracy: the mass murderers are they!", "Death to imperialism! - People's War until Communism "and many other of our block was a determined, combative expression.

Our block had as clear a Marxist term, inter alia, be by honoring the classics of Marxism - Marx, Engels, Lenin, Stalin and Chairman Mao Tse-Tung - showed.

We are firmly convinced that only by proving the fallen revolutionaries them due honor, by making the revolution. The need ideology and party. We understand our actions as a contribution and we are very excited about the many positive reactions.