Jackboot Democrats - Leon Rosselson : In a jackboot democracy, anyone can buy anything with money and an elegant lie.

The army's on manoeuvres and the force on the prowl,
So you'd better mind your manners when you hear the sirens howl.
They've rounded up the doubters and they've counted up the dead
And the spotter helicopters are patrolling overhead.

For the Jackboot democrats are on parade.
The ones who're made of money and the ones who've got it made.
The top brass the upper class, the highest of the high,
You can watch them on the giant screen that's blocking off the sky.

The grubbers from the media are panting for the off
And their doggy tails are wagging as they guzzle at the trough.
They've learned the trick of sitting up and begging while they wait
For a tasty little titbit from the tables of the great.

And they're Jackboot democrats hoping before long
To emulate the toad who's been rewarded with a gong
For building concrete runaways across the nation's mind
So the military can land there whenever they're inclined.

Here come a frenzied mob of money-mongers, stockbrokers galore,
Bankers, company directors, speculators by the score,
And they're trampolining skywards with great singleness of mind
Propelled by jets of noxious gases that they're burping out behind.

And they're Jackboot democrats, bulls of enterprise,
Their bank accounts are bulging, and they're blank between the eyes,
They're trading in the future for a heap of ready cash
As they take the treasures of the earth and turn them into trash. 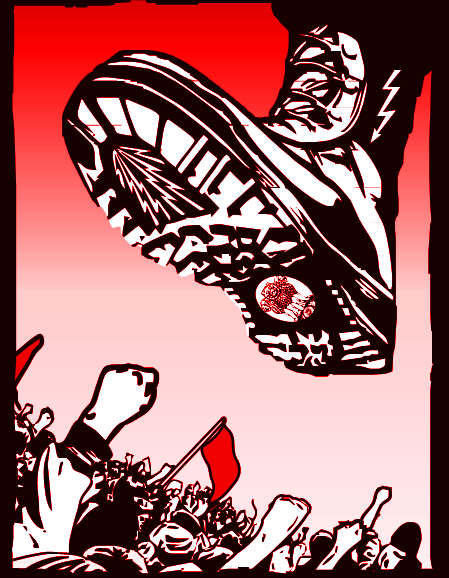 See the coffin-load of judges, legal guardians of the state,
See their wigged and robed cadavers as they slowly levitate,
see them conjure up from their gaping mouths and spitting tongues of fire
Plastic bullets, rubber truncheons, riot shields and razor wire.

And they're Jackboot democrats, loath to spare the rod,
Exchanging notes with ministers, comparing notes with God.
It's here a stern injunction and there a hefty fine
So that wealth is kept in power and the plebs are kept in line.

There's a chorus line of Tory clones, a leer on every lip,
performing patriotic pirouettes while Matron cracks the whip,
Bleeping out identical statistical refrains
From the holes in their anatomy that double as their brains.

And they're Jackboot democrats, quick to calculate
The profits they can pocket while they steer the ship of state.
With her finger on the button, Matron points the way ahead-
Oh she's got a will of iron and soul of lead.

In a jackboot democracy, anyone can buy
Anything with money and an elegant lie.
And if you fail to make the grade be sure to qualify,
For a bauble's worth of glory when you're called upon to die-

For jackboot democrats, strutting centre stage,
Exhibiting the future in an air-conditioned cage.
They've got a sacred mission to make the kind of world that's
Fit for freedom-loving Jackboot democRATS.