Former Sri Lankan leader Mahinda Rajapaksa tried to deploy the army when he realised that he had lost elections, a spokesman for new President Maithripala Sirisena has alleged. 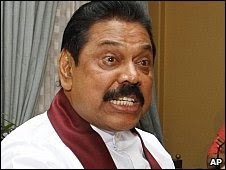 Colombo, Sri Lanka - In a surprising turn of events, Mahinda Rajapaksa - who ruled the country for a decade and was seeking a third term in office by calling snap elections two years ahead of schedule - was forced to concede defeat after last week's vote.

His opponent Maithripala Sirisena defeated the incumbent president by taking 51.3 percent of the vote on the promise of bringing about "qualitative change" and transferring sweeping presidential powers implemented by Rajapaksa back to parliament.

Former Sri Lankan leader Mahinda Rajapaksa tried to deploy the army when he realised that he had lost elections, a spokesman for new President Maithripala Sirisena has alleged.

He said that the head of the armed forces came under pressure to intervene shortly before Mr Rajapaksa conceded defeat on 47.6% of the vote.

There has been no comment from the military about the allegations.

Democracy and Class Struggle welcomes defeat of Rajapaska and celebrates by making available a History of Ceylon written by the late Comrade N. Shanmugathasan here :