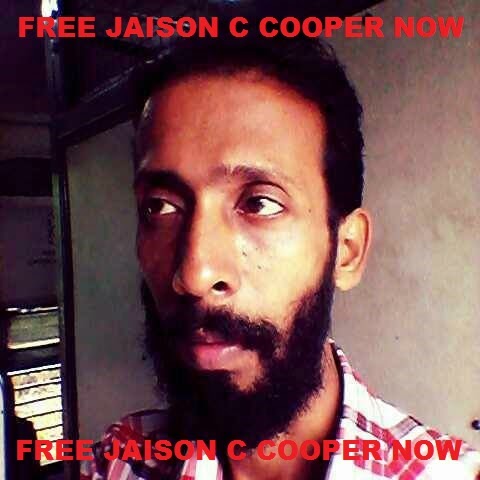 Possessing literature "praising Maoism" is the latest addition to the list of Unlawful Activities. This innovation by Kerala police,who justified their arrest of Jaison C. Cooper by claiming that 'on probe they have retrieved pamphlets and literature praising Maoism from his home'.
Mathrubhumi News reports -

"One arrested in connection with Maoists attack

Kochi: Police have taken a person who is alleged to have connection with Maoists attack at National... Highway Authority of India (NHAI) office the other day here at Kalamasserry. The arrested is identified as Jaison Cooper, a government employee with State Insurance Department. Police said that on probe they have retrieved pamphlets and literature praising Maoism from his home. But, Jaison Cooper denied the allegation."

Jaison Cooper, a well-known social activist and blogger, actively engaged in a variety of people’s struggles in Kerala, India has been taken into police custody from his office on 29 January 2014, ​
Thursday morning without any notice or arrest warrant. The police who took him into custody told his colleagues in the office that he would be released if any of his colleagues reach the police station. Accordingly two persons working in the same office reached the Thevara Police Station.

The police however the changed their earlier version and told them to wait for 10 minutes​ as the Circle Inspector of Police needed to have a word with them.  The police then said that Cooper will not be released and detained in the station.

This was followed by a series of police action in different parts of Ernakulum on the same day. The residents of advocate Thushar Sarathy, Secretary of Janakeeya Manushyavakasa Prasthanam (People’s Human Rights Forum), advocate P.J. Manuel and artist-activist Jolly Chirayath, Convener of Sthree Koottayma, a Kochi-based feminist collective were raided without fulfilling any legal requirements.

The police has seized several files connected with the cases handled by advocate Thushar from his residence. The police also collected several books from his library, all of them available from any bookshop. The cops took several notices and pamphlets linked with various peoples struggles from the residences of Advocate Manuel and Ms. Jolly.

The police have also not given the receipts of the goods seized in the raids as required under the law.​ The absence of a specific seizure list by the police prepares the ground for a further abuse of the legal framework to aid in the repression of these activists.​ Moreover, it is also learnt that mobile phone and computer records were scanned at length by the police.

On Friday, 30 January 2014,​the police had formally recorded the arrest of Cooper under the draconian Unlawful Activities Prevention Act (section 13 b of UAPA). The police presented him in the court at 1.30​p.m.​ and the court granted his custody to the police for the next six days. The police also arrested advocate Thushar from Kozhikode the same day while he was attending a press conference about a protest meeting by human rights activist to be held in Kozhikode on Saturday.

It must be mentioned that Thushar Sarathy, being a civil rights activist in the forefront of people’s struggles has been systematically under police surveillance. News-reports from Kerala have highlighted how he was not merely under surveillance from the police, but he, along with Jaison Cooper, was also included in a “Maoist look-out notice” for his participation in the struggle against illegal quarrying carried out by the people of Ambittantharissu village in Palakkad district. As a logical step in the repression curve, the police have gone ahead and arrested him. These arrests are clearly a step to criminalize every form of opinion and to punish every act of dissent.

We, the undersigned, believe that this police action is a well concerted political act to silence all voices raising critical questions about the political, economical and social issues in the country. The act of the police should be condemned by all people believing in the freedom of expression and the right to dissent. The incident also shows that the police in Kerala under a Congress Regime are no different from the Hindu Fascist regimes in other parts of the country.

We, the undersigned, place the following demands before the Chief Minister of Kerala and call upon him to: