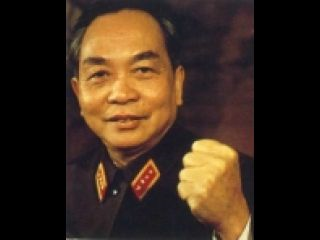 Comrade Giap led the Vietnamese People’s Army in making use of smaller and less modern weapons against the bigger and more advanced weapons of the US military... The US forces would eventually be defeated in Vietnam
.
PRESS STATEMENT
Communist Party of the Philippines
06 October 2013


The Communist Party of the Philippines (CPP) salutes Comrade Vo Nguyen Giap, erstwhile general of the Vietnam People’s Army, who led the Vietnamese people’s guerrilla warfare against the French and American colonialists from the 1950s to the 1970s.

Comrade Giap died last October 4 in a hospital in Hanoi, Vietnam. He was 102.

Comrade Giap was born in Central Vietnam on August 25, 1911. At the age of 14, he became active in the patriotic movement. He would later become a teacher and journalist before joining the Communist Party of Indochina led by its chairman Ho Chi Minh. The Indochinese peninsula comprising Vietnam, Laos and Cambodia was then a French colony.


During World War II, Comrade Giap traveled to southern China in 1944 together with Chairman Ho to avoid arrest. With the support of the Communist Party of China, Comrades Giap and Ho prepared to launch the revolutionary armed resistance in Indochina, which was then occupied by the Japanese. Comrade Giap led the first full-time platoon of guerrilla fighters, driving away the Japanese occupation forces.


In 1945, the French recolonized Indochina, rousing the patriotic spirit of the Vietnamese people and their desire for national liberation. Led by the Communist Party of Indochina, they waged an epic guerrilla war against the French colonialists. To this day, the victory of the Vietnamese people’s war over the French colonialists continues to inspire heroism among the exploited and oppressed peoples of the world desirous of national freedom.


Comrade Giap led the Vietnamese People’s Army in the historic Battle of Dien Bien Phu, the center of French military power in Indochina. Here, the Vietnamese people demonstrated how they could defeat a more modern army through the use of guerrilla tactics. They marched in their thousands to build hidden trails, dug hundreds of kilometers of trenches, dismantled their cannons and artillery and manually pulled them up to high mountain ridges in order to quietly encircle the overly confident French troops. They launched a blitzkrieg attack against the French military base and after 55 days of fighting, forced the complete surrender of the French colonialists on May 7, 1954.


In succeeding negotiations in Geneva, Vietnam was temporarily divided into North Vietnam which was under the people’s government led by the Communist Party; and South Vietnam, which would be colonized by the US after the withdrawal of the French forces.


In the next two decades, the Vietnamese people would continue to wage revolutionary resistance against the US colonialists. Despite having a modern war machine, the US forces would eventually be defeated in Vietnam. Comrade Giap led the Vietnamese People’s Army in making use of smaller and less modern weapons against the bigger and more advanced weapons of the US military.


The victory of the Vietnamese people in defeating the US military forces in 1976 paved the way for the reunification of Vietnam under the banner of the Communist Party of Vietnam.


The lessons of the Vietnamese people’s war of resistance continue to illumine people’s wars around the world, including that being waged by the Filipino people through the New People’s Army. The military writings of Comrade Giap, especially in waging guerrilla warfare, have been translated into Pilipino and other local languages, enabling Filipino revolutionaries to study the lessons of the people’s war in Vietnam.
Posted by nickglais on 10/06/2013 03:07:00 PM