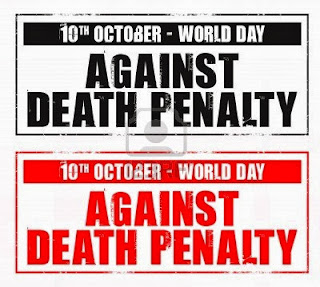 Comrade Tongogara of The Free Mumia Abu Jamal Defence Campaign in the United Kingdom says
:
"There is no question that the Death Penalty  fundamentally a class question.  The ruling class  of each respective country has used the Death Penalty as a weapon to silence  dissenting opinion."
Today is World Day Against the death penalty and we call for support to end the death penalty worldwide.

On 12 July 2013, the United Nations received Boliva's accession documents to the Second Optional Protocol to the International Covenant on Civil and Political Rights, aiming at the abolition of the death penalty.

Earlier this year, Latvia ratified the same Protocol on 19 April 2013. It had abolished the death penalty for all crimes on 1st January 2012 and ratified Protocol No. 13 to the European Convention for Human Rights on 5 January 2012.

After two years of campaign, hundreds of letters and about ten missions on the ground, Madagascar signed the Second Optional Protocol to the International Covenant on Civil and Political Rights, aiming at the abolition of the death penalty on 24 September 2012.

Earlier that year, the United Nations received Benin's accession documents to the same Protocol, on 5 July 2012, and Mongolia officially acceded to the Protocol on 13 March 2012. Dominican Republic ratified the American Protocol for the abolition of the death penalty on 27 January 2012. 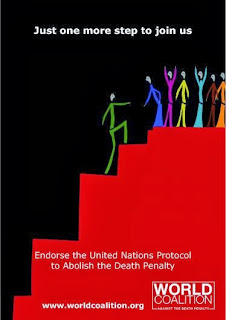 All these developments suggest that the campaign is bearing fruit.

The target countries for the new year of campaign

As of 29 August 2013, 77 States out of the 167 State parties to the ICCPR and out of the 140 abolitionist States in law or in practice have ratified the Second Optional Protocol.

In this context, the World Coalition continues its global campaign to inform, encourage universal ratification of the Protocol and have this “essential bolt to the door” against the death penalty.

If a “critical mass” of States ratifies the Protocol, this will establish that the death penalty is an unquestionable violation of human rights, especially of the right to life.
Posted by nickglais on 10/09/2013 05:52:00 AM