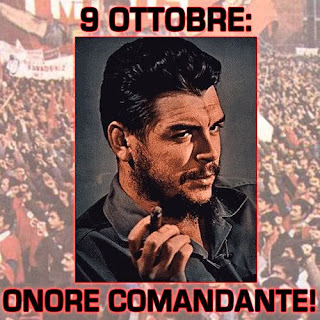 This article expresses the personal views of Harsh Thakor and is not the view of Democracy and Class Struggle.

Today we commemorate the 46th death anniversary of Che Guevera who rekindled the flame of Marxism-Leninism more than any other Latin American revolutionary in this century.

Above all Che was a 'spiritual 'Marxist' who believed that it is only the revolutionary who is blessed with true feelings of 'love.'No revolutionary placed as much emphasis on the essence of the spiritual change in man above everything.

Morally Che supported Mao Tse Tung's Socialist policy in the 1960's over Khruschev's revisionist policies. He greatly admired the Chinese Communist party's innovation of communes when visiting China in 1964 above the U.S.S.R of Khrushchev which promoted materialist policies. he also supported Mao Tse Tung's concept of armed struggle by promoting the concept of revolution internationally.

In many ways’s Che's practice reflected the policy which Lin Biao advocated in 1965 in his theory of peoples war. Che would have been a great supporter of Mao Tse Tung's Cultural Revolution which made a serious attempt to create a new Socialist Man.Che was the staunchest supporter of the greatest spirit of dissent or debate within a Socialist Society which his writings deeply reflected. Even China under Mao Tse Tung in the Cultural revolution did not attain the level of Socialist freedom that Che advocated.He was deeply critical of the regimentation in Stalinist U.S.S.R and also was critical of the killing of Leon Trotsky in Mexico in 1940.

Above all Che rejected mechanical application of Marxism -Leninism which he showed in the Cuban revolution.With Fidel Castro he created the most progressive society that ever existed in Latin America. Morally, no revolutionary reflected the spirit of Mao Tse Tung more than Che Guevera in the 1960's.Had Che lived till today he would have been a deep admirer of the C.P.I.(Maoist) and earlier the 'Shining Path' in Peru.

Che's line would have had similarity to the Leading Light Communist Organization and condemned the Revisionism of the Revolutionary Internationalist Movement. I am certain he would have been harshly critical of Bob Avakian who rejected the role of revolution in the 3rd world.

However we have to also asses Guevera's errors like his foco theory that rejected the mass line. and Mao's concept of protracted peoples war. Mike Ely mades a superb analysis of this .Che also rejected the concept of the vanguard role of the Communist party,like theorists like Alan Badiou today.

Leninists have to be critical of this but must still remember that even in China of Mao the relationship of the vanguard Communist party with that of the revolutionary masses or mass organziations was complex and there was s till need for the mass organizations to have a greater level of political independence from the hegemony of the party.

This aspect had been completely supressed in U.S.S.R under Stalin.Che's military ideas although ecclectical in some ways was similar to those of Comrade Mao Tse Tung.

We have to reject Che's New Left concepts but uphold his revolutionary spirit. Revolutionaries have to critically study Che's errors in Bolivia.Later even groups like 'Shining Path' in Peru or 'Peoples War Group" in India had shades of Guevera's focoist tendency which reflected the ‘military’ approach.

Whatever his errors I would still give Che a place in the annals of great revolutionaries like Ho Chi Minh,but still not rank him with Marx.Lenin ,Stalin and Mao as he was theoretically erroneous .

Jean Paul Sartre called him the most complete man of the 20th century.

Today we all dip our blood in memory of this revolutionary legend who burns in our hearts like a red flame.Below I am posting a criticism which makes a correct assessment of his mistakes but still fails to project Che as a true Marxist revolutionary. This is corrected in a post by the L.L.C.O.which I have posted after.

Che Guevara was killed. Such a thing is liable to happen, because a revolutionary may get killed. Che Guevara, however, was a victim of his own non-Marxist-Leninist views.

"Who was Che Guevara? When we speak of Che Guevara, we also mean somebody else who poses as a Marxist, in comparison to whom, in our opinion, Che Guevara was a man of fewer words. He was a rebel, a revolutionary, but not a Marxist-Leninist as they try to present him. I may be mistaken—you Latin-Americans are better acquainted with Che Guevara, but I think that he was a leftist fighter. His is a bourgeois and petty-bourgeois leftism, combined with some ideas that were progressive, but also anarchist which, in the final analysis, lead to adventurism.

"The views of Che Guevara and anyone else who poses as a Marxist and claims "paternity" of these ideas have never been or had anything to do with Marxism-Leninism. Che Guevara also had some "exclairicies" in his adoption of certain Marxist-Leninist principles, but they still did not become a full philosophical world-outlook which could impel him to genuinely revolutionary actions.

"We cannot say that Che Guevara and his comrades were cowards. No, by no means! On the contrary, they were brave people. There are also bourgeois who are brave men. But the only truly great heroes and really brave proletarian revolutionaries are those who proceed from the Marxist-Leninist philosophical principles and put all their physical and mental energies at the service of the world proletariat for the liberation of the peoples from the yolk of the imperialists, feudal lords and others."

"The authors of the theory that the "starter motor" sets the "big motor" in motion pose as if they are for the armed struggle, but in fact they are opposed to it and work to discredit it. The example and tragic end of Che Guevara, the following and prorogation of this theory also by other self-styled Marxists, who are opposed to the great struggles by the masses of people, are publicly known facts which refute their claims: We must guard against the people lest they betray us, lest they hand us over to the police; we must set up "wild" isolated detachments, so that the enemy does not get wind of them and does not retaliate with terror against the population! They publicize these and many other confusing theories, which you know only too well. What sort of Marxism-Leninism is this which advocates attacking the enemy, fighting it with these "wild" detachments, etc. without having a Marxist-Leninist party to lead the fight? There is nothing Marxist-Leninist about it. Such anti-Marxist and anti-Leninist theories can bring nothing but defeat for Marxism-Leninism and the revolution, as Che Guevara's undertaking in Bolivia did."

"This trend brings the theses of the armed uprising into disrepute. What great damage it causes the revolution! With the killing of Guevara, the masses of common people, contaminated by the influences of these anarchist views, will think: "Now there is no one else to lead us, to liberate us!" Or perhaps a group of people with another Guevara will be set up again to take to the mountains to make the "revolution," and the masses, who expect a great deal from these individuals and are burning to fight the bourgeoisie, may be deceived into following them. And what will happen? Something that is clear to us. Since these people are not the vanguard of the working class, since they are not guided by the enlightening principles of Marxism-Leninism, they will encounter misunderstanding among the broad masses and sooner or later they will fail, but at the same time the genuine struggle will be discredited, because the masses will regard armed struggle with distrust. We must prepare the masses politically and ideologically, and convince them through their own practical experience. That is why we say that this inhibiting, reactionary theory about the revolution that is being spread in Latin America is the offspring of modern revisionism and must be unmasked by the Marxist-Leninists."

Quoting the Leading Light Communist Organization:He became a famous symbol of revolutionary struggle around the world. Che was a prolific writer, although his writings straddled the split between the Maoists and the Soviet revisionists, although he expressed more sympathy for the Maoists. His writings are more consistent with the Maoist trend than with the revisionists of his day. He died before the Cultural Revolution. However, Che once stated that the Chinese had a higher degree of socialist morality. He leaned toward China. Che has come to be associated with the erroneous military strategy of focoism — a military strategy that overemphasizes the role of small bands of guerrillas as opposed to one that emphasizes the construction of New Power. Focoism is rejected by Leading Lights. Leading Lights advocate global people’s war. Even so, Che was a heroic communist who lived and died for the people.
Posted by nickglais on 10/09/2013 11:32:00 AM