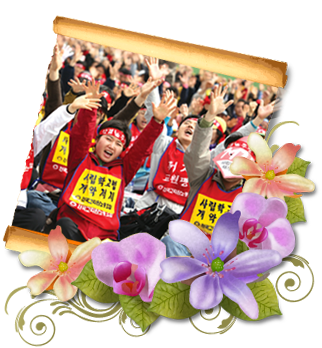 The South Korean government is widening its anti-democratic crackdown on its political opponents, revolving around trumped-up accusations that the opposition United Progressive Party (UPP) plotted a coup.


President Park Geun-hye’s administration is attempting to illegalise the Korean Teachers and Education Workers Union (KTU), accusing its members of being involved in the alleged conspiracy to overthrow the government.

Neo-McCarthyism in South Korea! A Letter of Plea to the Conscientious People of the World


A Letter of Plea to the Conscientious People of the World: In Pursuit of Truth, Justice and Democracy in the Republic of Korea (South Korea)

Do you know what’s happening in South Korea?

Do you know how and who became the president of South Korea in 2012?

I urge you to read this letter of plea and distribute it widely to your friends and network members.
Democracy is steadfastly dying in South Korea!

Very similar to the Watergate in the USA, the Korean National Intelligence Services (NIS, aka. KCIA) illegally, meddled and intervened, in the 2012 presidential election.

Another unfortunate outcome of the rigged and ‘stolen’ election led to the Korean Neo-McCarthyism. Members of the opposition party and anyone who do not share the views and the politics of the ruling party are deemed “Reds” or “Pro-North Korea”!

Consequently, scholars, politicians and even the ordinary citizens who express diverse views or differing opinions are framed, made scapegoats and severely persecuted.

The Civil Rights in South Korea are virtually non-existent! The Yoo-shin (the repressive and autocratic set of ‘laws’ written into the constitution enforced during Park Chung-hee’s Military Dictatorship (1960-1979) is back and fully reactivated!

What is the Korean National Intelligence Services? (aka: “KCIA”)

During the dictatorial regime of Park Chung-hee (1960-1979), the NIS was conceived in order to surveillance, capture and prosecute his political dissidents. Those non-conformists were labeled Communists or pro-North Korea activists,’ and they were brutally tortured and killed by the NIS.
Background Information on the Presidential Election 2012:

Covert and illegal activities were being actively conducted by the ruling Saenuri Party prior to the Presidential Election 2012. The National Intelligence Services (NIS) was illegally and brazenly breaking the constitutional and the election laws of South Korea.

Undercover agents created hundred and thousands of user names on the internet and posted favorable comments on the ruling party presidential candidate, Park Geun-hye, and posted fabricated damaging comments about the opposition candidates, including Jae-in Moon.

The fabricated internet comments defamed and ruined the other candidates’ reputations and character. The NIS not only used their agents, hired at the expense of the taxpayers, but it brazenly (bribed) paid the North Korean defectors and the South Korean citizens to carry on this smearing campaign against the opposition candidates.

The NIS went even further to destroy vital and critical documents and evidence that proved the illegal intervention by the NIS.

In the aftermath of this scandalous intervention by the NIS in the Presidential Election 2012, the constitutional legal scholars have declared this intervention, an electoral Coup d’etat’!

To demand the absolute legal and civil accountability from the Park Regime, thousands upon thousands of citizens have taken themselves to the streets, holding continuous and concurrent candlelight vigils.

Unfortunately, though, most South Korean mass media are willingly blind-sided: They have opted out only to report the views of the ruling Saenuri Party. The ultra right-wing and conservative groups are condemning the mass candlelight vigils as an electoral disobedience.

To make the matters worse, the Park government is trying to elude the legitimacy of this political crisis by re-launching the Neo-McCarthyism, launched and enforced by her late father, Park Chung-hee.

Furthermore, the Park regime has embarked upon a witch-hunt on the Lawmaker, Seok-ki Lee, of the Unified Progressive Party. The freedom of expression and ideology, the legal and civil principles of presumption of innocence till proven guilty; trial by due process by impartial jury and the protection of suspects are being mercilessly demolished.

If you feel and understand the current situations in South Korea to be unfair, undemocratic and impairing of the basic civil rights, please go to ( http://goo.gl/4VEaNI ) to sign and forward this message to as many people as possible via emails and SNS.

We would greatly appreciate it if you could make an effort to draw public attention to this political crisis in South Korea through submission to journals, hold conferences in collaboration and in solidarity with other civil rights activists.

Alliance of Conscientious People of the World