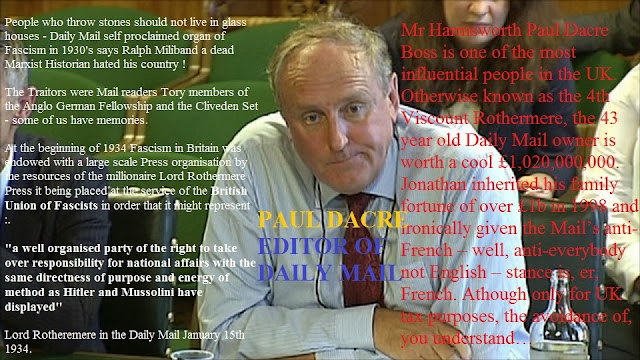 Mr Harmsworth is one of the most influential people in the UK. Otherwise known as the 4th Viscount Rothermere, ]Daily Mail owner is worth a cool £1,020,000,000. Jonathan inherited his family fortune of over £1b in 1998 and ironically given the Mail’s anti-French – well, anti-everybody not English – stance is, er, French.

Athough only for UK tax purposes, the avoidance of, you understand…

People who throw stones should not live in glass houses - Daily Mail self proclaimed organ of Fascism in 1930's says Ralph Miliband  a dead Marxist Historian hated his country !

The Traitors were Mail readers Tory members of the Anglo German Fellowship and the Cliveden Set - some of us have memories.

At the beginning of 1934 Fascism in Britain was endowed with a large scale Press organisation by the resources of the millionaire Lord Rothermere Press it being placed at the service of the British Union of Fascists in order that it might represent :.

Democracy and Class Struggle say some commentators say Rothermere only supported Nazis in early 30's and changed his mind in later 30's. That is a lie here is what he was saying in 1939.