New York: “If you look across the world, riots always begin typically the same way: when people cannot afford to eat food,” Margarette Purvis, the president and CEO of the Food Bank for New York City 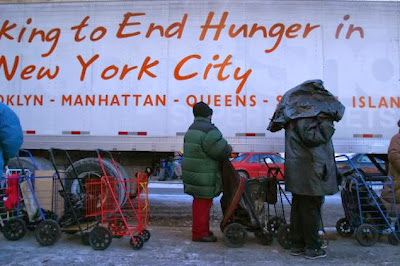 The nationwide cut “is equivalent to about 16 meals a month for a family of three,” according to a Center on Budget and Policy Priorities analysis using the USDA’s “Thrifty Food Plan.” CBPP called the roughly $5 billion annual cut to the Supplemental Nutrition Assistance Program “unprecedented” in “depth and breadth.”

“If you look across the world, riots always begin typically the same way: when people cannot afford to eat food,” Margarette Purvis, the president and CEO of the Food Bank for New York City, told Salon Monday. Purvis said that the looming cut would mean about 76 million meals “that will no longer be on the plates of the poorest families” in NYC alone – a figure that outstrips the total number of meals distributed each year by the Food Bank for New York City, the largest food bank in the country. “There will be an immediate impact,” she said.

“The fact that they’re going to lose what’s basically an entire week’s worth food” each month, said Purvis, “it’s pretty daunting.” She told Salon that while policymakers “are attempting to punish people for being poor,” and “people are comforted by believing that they know that a person has to have done something wrong in order to be poor,” in reality, “I can tell you that more and more folks have more than one job and are still needing help.” (As I reported last week, audio recorded by a McDonald’s worker-activist showed a counselor on an employee hotline encouraging her to sign up for food stamps because it “takes a lot of the pressure off how much money you spend on groceries.”) Purvis added that cutting food stamps was “not even good business sense,” because each dollar of food stamps infuses over $1.70 of spending into the economy.

“We were all told that these cuts for November 1 would not happen,” said Purvis. When “they decided they were going to take from some of the increases to food stamps” to fund First Lady Michelle Obama’s “Let’s Move” program, she told Salon, “We were told, you know, by the president…these cuts will not happen, we won’t get rid of the program.

November 1 is around the corner, and no one has restored that money.”