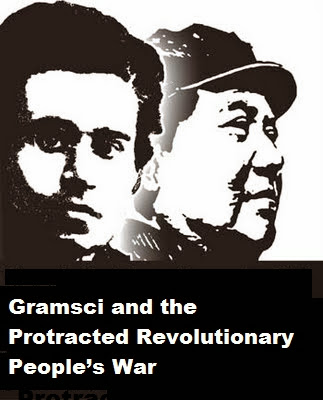 Democracy and Class Struggle is pleased to publish an article on Gramsci by Comrade Umberto C from La Voce n. 44 of the (new) Italian Communist Party published  in July 2013 on Gramsci and Protracted Revolutionary People's War..

In an earlier article on Gramsci this year we indicated that we would be publishing  some of the (New) Italian Communist Party's path breaking work on the question of Gramsci and Protracted Peoples War.

We also welcome a recent contribution on the same subject from the Revolutionary Initiative in Canada by Comrade Amil K  called Towards the War of Position: Gramsci in Continuity and Rupture with Marxism-Leninism.

Remember Gramsci understood that the universal was found in the particular, he was a Sardinian who gave expression to the universal  idea of Proletarian Revolutionary Order in the context of the new Italian State..

The “war of position“ of Gramsci is essentially a paraphrase of the more explicit expression of PRPW that we use, taking it from Mao.“(1)
We gladly publish the article by Comrade Folco R. which shows the contribution by Antonio Gramsci to the development of the strategy of the revolutionary people’s war as a strategy of the socialist revolution in the imperialist countries.
Firstly, because the communist movement in our country absolutely needs to refine his elaboration about the forms of socialist revolution. The more our fight progresses, the more widely the war that we started with the founding of the Party spreads, as the crisis of capitalism drives the masses to enlist in the PRPW, as in the 1943-1945 period a growing number of young people, workers, farmers and housewives joined the Resistance, the more it is necessary that the Party learns to put the general conception of PRPW in concrete initiatives: in campaigns, battles and operations until the mobilization of the broad masses that will establish socialism in Italy and so will give their contribution to the second wave of the proletarian revolution advancing worldwide.
Secondly, to give Antonio Gramsci the place he deserves in the Italian and international communist movement for the work he did. Against the misrepresentation of his work made by Togliatti and his accomplices and successors who have submitted Gramsci as a precursor of peaceful road to socialism, in practice of waiver of the socialist revolution. But also against the anti-Communist use of Gramsci the bourgeois left tries to make these years: it presents him in Italy and in the world as an opponent of the concept and the line personified by Stalin who led the Communist International and the Communist movement until 1956. While in reality it was Gramsci, even if he was segregated in fascist prisons, who developed, in the light of the tasks of the socialist revolution and the experience of the communist movement, the most comprehensive critique of Trotsky and Bukharin‘s conceptions who were the main opponents of Stalin about the orientation to be given to the revolution in the Soviet Union and internationally, and about the line with which pursuing it.
These two reasons amply justify the publication of the contribution of the comrade, although his study of Gramsci’s work is still in progress, which is also reflected by the uncertainty in pointing out the main texts among those relevant to the assimilation of the teachings of Gramsci about the PRPW.
The editors of La Voce
In issue n. 43 of La Voce Umberto C. writes that Gramsci, “the one and only communist leader ... which reflected on the form of the socialist revolution in the imperialist countries, ... developed (see the Prison Notebooks 7, (§ 16), 10 (§  9), 13 (§7), and others) the theory of the “ war of position”, which, freeing ourselves from the language imposed by fascist prison censorship, today we would call protracted revolutionary people’s war.”
The Protracted Revolutionary People’s War (PRPW) is socialist revolution that is being built. The PRPW, as conception, is opposed to the conception of common sense (that is to say the current ways of speaking and thinking, the result of clergy and bourgeoisie’s dominant role) that the socialist revolution would break out, that would be a spontaneous rebellion of masses of the people forced to intolerable conditions. The communist movement at its beginning (1848) inherited this conception and understood the socialist revolution as a revolution that breaks out, the way of the revolutions of the past. This conception of the socialist revolution, anyway, was at odds with the experience that the communist movement was developing. The Communists little by little realized this contrast between their conception of the socialist revolution and the practice of socialist revolution.
Engels was the first who, in 1895, exhibited in an organic way the concept that the socialist revolution was by its nature a form different from the revolutions of the past, that does not break out but it is being built.(2) But the socialist parties of the time (which were connected to each other in the Second International) did not accept his discovery. Even leaders of those parties who professed themselves Marxists, such as the German Social Democratic Party, joined Marxism in a dogmatic way, albeit in different gradations. Communism, socialism and socialist revolution were articles of faith, which were not put in the lines for guiding the current activity of the parties. Precisely for this reason they were unable to cope with their task, as the events of 1914 blatantly demonstrated. Among the socialist parties of the time, only Lenin’s party put Engels’ conception in his practice, but it did it without making Engels’ conception a weapon in the struggle against dogmatism, opportunism and economism.(3) He built the revolution in Russia as a PRPW, but without being aware of it (so confirming that the practice is generally richer than the theory). Similarly, Stalin and the Communist International in the early part of the last century led a successful socialist revolution internationally as PRPW of which the Soviet Union was the world red base, but did not reach full consciousness of what they were doing. This gave way in the Communist International to dogmatism, opportunism and economism that came to light openly in the 50s of last century.
Mao Tse-tung was the first party leader who developed the conception of the PRPW as a strategy of socialist revolution. Mao Tse-tung, however, enunciated this conception as a strategy of the revolution in China, tying it to the specific features of Chinese social and political situation (Why Can Red Power Exist in China? - October 1928 Selected Works of Mao Tse -tung, vol. 2 Editions Social Relations, available on the website of the (n)PCI http://www.nuovopci.it/arcspip/article0c16.html in Italian language).

Later it was indicated as the strategy of the revolution for all the colonial, semi-colonial and neo-colonial countries in which the mass of the population was still made up of peasants.

Only with the rise of Marxism-Leninism-Maoism as the third and higher stage of communist thought it was acquired the conception that the PRPW is the universal strategy of the socialist revolution, the strategy that the Communists must follow in every country in order to win.(4)
Gramsci in his condition as a prisoner of the fascists from 1926 to his death in 1937 did not lead the revolutionary process in Italy, but working out the experience of the socialist revolution in Italy and of the other imperialist countries and also analyzing the way in which the Bolsheviks had won in Russia, has brought important contributions to the formulation of the strategy of PRPW.(5)
Below I expose the main aspects of PRPW that Gramsci has more or less widely developed in his Prison Notebooks. The quotations from Gramsci or others are in italics. The emphases in bold are mine. 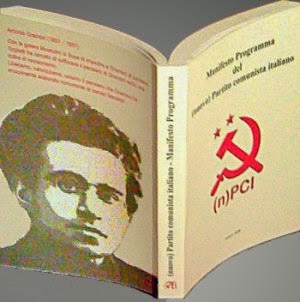 Brilliant!!! Tell me, Nick, what do you think about this translation? Is this a good English, or else we need some help by comrades like you?
Red greetings,

I have no problem with the translation if any other readers have a problem leave us a comment.