Dismembering the Traitor Class - The British Establishment and Fascism 1920- 1940 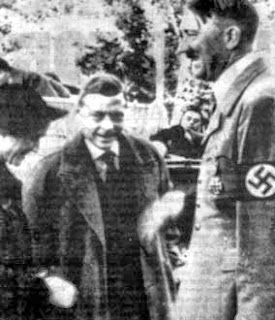 
The first avowedly fascist organisation in Britain was the 'British Fascisti' (later just plain old 'British Fascists') formed in 1923. Largely comprised of military officers it was little more than a strong arm squad for the Conservative Party, stewarding Conservative meetings and calling for votes for the Conservative Party. One of their few policies was, as a means of reducing unemployment, a demand for a reduction in income tax so that rich people could hire more servants.

During the General Strike of 1926 they served as scabs, through this they acquired a martyr when one of their members scabbing on the railways lent too far out a window and was decapitated by a bridge. They also worked as agents for Special Branch and M.I.5. However in 1920's Britain admiration for Fascism mostly meant admiration for the Italian Government rather than agitating for Fascism in Britain.

As Sir Winston Churchill put it:


"If I had been an Italian, I am sure that I should have been wholeheartedly with you [Mussolini] from start to finish in your triumphant struggle against the bestial appetites and passions of Leninism" (Churchill's misnomer for working class resistance)
"But in England we have not had to fight this danger in the same deadly form. We have our way of doing things"(1)

According to historian A.J.P. Taylor:


"Every politician extolled the virtues of democracy, especially at the expense of Soviet Russia. Despite this rhetoric, MacDonald wrote friendly personal letters to the Fascist dictator Mussolini; Austen Chamberlain exchanged photographs with him and joined him in family holidays; Churchill sang his praises in newspaper articles" (2)

It was in the 1930's that British Fascism had it's first and so far only flowering in the form of Sir Oswald Mosley's British Union of Fascists formed on the first of October 1932. Mosley who had moved from the Tory Party to the Labour left to Fascism, formed the 'January Club' a sort of discussion group/ front organisation to attract Establishment types to his Blackshirt movement.

Devotees of the January Club included Wing-Commander Sir Louis Greig, Lord Erskine a Conservative-Unionist M.P. and assistant Government whip, Lord William Scott brother of the 8th Duke of Buccleuch and Conservative-Unionist M.P., Lord William Scott who was Secretary of State for War from 1900 to 1903 and Secretary of State for India from 1903 to 1905 and Lord and Lady Russell of Liverpool.

The B.U.F. began to receive support from the influential Conservative press in the form of Media Baron Lord Rothermore, who's paper the 'Daily Mail' backed Mosley enthusiastically, beginning with the infamous 'Hurrah for the Blackshirts' headline of the 8th of January 1934. Lady Houstons 'Saturday Review' was also outspoken in its endorsement of England's would be Fuehrer.
According to the 'Daily Mail' of the 15th of January 1934, the British Union of Fascists was:

Writing in the 'Daily Mail' of the 25th of April 1934, Colonel Thomas Moore, a Conservative M.P. pointed out that:


"Surely there cannot be any fundamental difference of outlook between the Blackshirts and their parents, the Conservatives"(4)


"These young Germans have discovered, as I am glad to note the young men and women of England are discovering, that it is no good trusting to the old politicians. Accordingly they have formed, as I would like to see our British youth form, a Parliamentary party of their own. . . We can do nothing to check this movement [the Nazi's] and I believe it would be a blunder for the British people to take up an attitude of hostility towards it. . . We must change our conception of Germany. . .The older generation of Germans were our enemies. Must we make enemies of this younger generation too?" (5)

Similar sentiments were voiced in the House of Commons, on the 24th of July 1934
William P.C. Greene, Conservative party M.P. for Worchester and a landowner in Australia asked:


"Is it not a fact that ninety per cent of those accused of attacking Fascists rejoice in fine old British names such as Ziff, Kernstein and Minsky" (7)

"Were some of them called Feigenbaum, Goldstein and Rigotsky and other good old Highland names" (8)

Nor was this the only display of parliamentary anti-semitism at the time, following Hitler's rise to power Edward Doran Conservative-Unionist M.P. for
Tottenham North had this to say:

On the 14th of June 1934 during the parliamentary debate following the anti-fascist disruption of the B.U.F. rally at the Olympia, Micheal Beaumont

Conservative M.P. for Aylesbury who described himself as

said of the B.U.F. that there was a lot of


"respectable, reasonable and intelligent people" [in it] (10)


"some of the most cultured members of our society" (11)

Admiration for Germany's Nationalist Socialist totalititarian dictatorship continued throughout the 1930's. Lord Londonderry, Secretary of State for Air from 1931 to 1935 became from early 1936 onwards an outspoken supporter of the Hitler regime.


"Lloyd George had an undisguised admiration for the German leader which was gradually transformed as the months went by into an intense admiration. 'Hitler' he continually remarked in private 'is a great man'" (12)

The most notorious episode of British Establishment Nazi loving was that of King Edward the 8th/Duke of Windsor. This execrable piece of royal vermin:
In fact Hitler had planned to reinstate Edward on the British throne as a puppet ruler following a German victory. According to a recent Channel 4 documentary, when Edward was interviewed in 1941 while he was governor of the Bahamas he said that:


"Hitler was the right and logical leader for the German people, it would be a tragedy if he was overthrown"

This line of thinking was still alive on the Home Front too, in 1940 M.I.5. investigated the 'Right Club' a crypto-Nazi outfit headed by Conservative M.P. Captain Maule Ramsay. 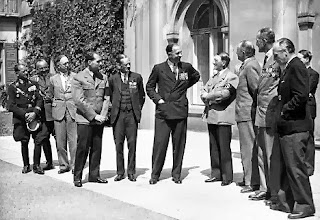 Indeed early in 1940/late in 1939 prominent member of the British establishment Lord Lloyd of Dolobrian , later a minister in Churchill's war cabinet , wrote a pamphlet entitled 'The British Case' , which explicitly rejected the notion of a war against Fascism ( a concept which later became a necessary part of mobilising the population for Total War after the fall of France ) and this rather than just reflecting Lord Lloyd's viewpoint , had a preface written by the aforementioned Lord Halifax, then Secretary of State for Foreign Affairs. In 'The British Case' Lord Lloyd writes:

"Our most ancient and faithful ally , Portugal , enjoys today greater prosperity than ever before in the modern world under the wise but authoritarian government of senhor Salazar. The government of Poland itself was definitely authoritarian . Above all , the Italian genius has developed , in characteristic Fascist institutions, a highly authoritarian regime which , however , threatens neither religious nor economic freedom , or the security of other European nations." (12a) This was of course before the Italian state entered the war.

1a) Quoted in Labour and Trade Union Review No.84