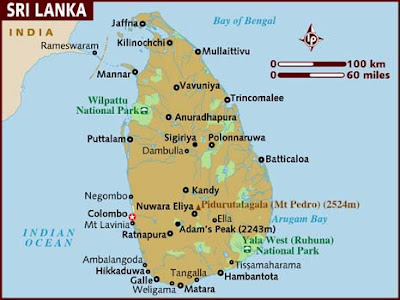 Democracy and Class Struggle has just received a communication from Sri Lanka further to a report we issued earlier of Tamil Girls being forced to Join Sri Lankan Army.

Of the women recently recruited to the 6th Brigade of the Sri Lankan Army (SLA) from the north on the 17th of November, 16 were admitted to the Kilinochchi district hospital on December 11, 2012 between 11.00 pm and 12.30 am.

·      They had recently been trained in Kilinochchi and Mullaitivu districts

·      Upon arrival at the hospital, some of the women were unconscious.
·      They were immediately isolated from the other patients and subsequently detained in a small room in the hospital’s northern section.

·      The northern section of the hospital is not accessible to the public; it is used exclusively by army personnel.

·      Shortly after the group of women was admitted, a large group of army personnel (male and female) gathered at the hospital.

·      Only SLA doctors and nurses are looking after these female patients.
·      Some of those who have been admitted remain unconscious.

·      It has been reported that those admitted are all Tamil. However, since some of the women are conversant in Sinhala, people suspect that some of the admitted patients are Sinhalese.

·      Dr. Karthikayan, the regional director of health services and district medical superintendent, has allowed only one Tamil attendant to enter the room where the patients are being kept. Other people have not been permitted to enter.

·      Dr. Karthikayan has earned a reputation as an ardent supporter of the Sri Lankan government. Perhaps out of fear, hospital staff members have refused to give out any information.

·      Since people still do not know who has been admitted, the relatives of those who were recently recruited have been left wondering. As a result, many have congregated near the hospital.

·      As of the writing of this report, no family members have been allowed to visit those who have been hospitalized.

·      Due to the large number of army personnel situated near the hospital, the atmosphere remains tense.
·      TNA Parliamentarian Sritharan visited the hospital at 11.15 am and he was made to wait till 12.45 and was told that he will not be allowed to see the women and also he was told that he has no legal right to visit them.

In addition, he was also that the hospital administration is being instructed by the military not to allow anyone to visit these women. In addition, mother of a young woman has gone to the hospital and was not allowed to see her daughter.

Subsequently, she was taken by the official of the military(higher official) and the outcome is not known. More than 30 military officials belonging to 57th Brigade are stationed at the hospital guarding the women.

Backgrounder to current Report : Tamil Women Coerced into Joining the Military- A Statement of Concern by the Women’s Action Network

Women’s Action Network (WAN), as a collective of 11 women's groups from the North and the East, is deeply concerned by the recent efforts to recruit women into the military in the districts of
Killinochchi and Mullaitheevu.

Post-war development has failed to provide the most basic needs for those who live in Killinochchi and Mullaitheevu, especially the women of the area. People continue to live in vulnerable situations
without sufficient security and independence, so may even lack the basics such as a safe place to sleep. After the war over 60% of families in Vanni are headed by women and they have become the
primary wage earners of their families, in addition to being the main care givers in the household.

Hence, women play a critical role in fulfilling social, economical and cultural needs and rights in the country. High unemployment and the rising cost of living control the choices and women are
forced to make decisions that go beyond choice. This militarised environment, including military involvement in economic activities, administration and even reconciliation, is not conducive for
human development further debilitates the already fragile existence of this community.

As the media has highlighted in recent weeks Tamil women have been recruited to the military. While this may seem as an action in the direction towards reconciliation and inclusion, a cursory
glance into the appointment process shows a lack of transparency, information and coercion. Military personnel of Mullaitheevu and Killinochchi area were involved in the recruitment process
and have targeted economically vulnerable families. In some villages it has been announced through loudspeakers or they have gone in-person and in a few others they have used the GS of the area.

Young women from women-headed families or families with five or more family members have been targeted in general. The greatest concern is the lack of information and informed consent. Those recruited have been informed that they would be engaging in clerical work, or with the GS, that work will only be for a few hours, and that they would be able to work in their own areas. They have also been promised a pay of Rs.30,000 per month. Around 109 women applied and appeared for interviews. The information provided never mentioned that they will be working for the military and will have to join the military to perform these duties.

On the 5th of November 2012, the military took the women who registered their names for these jobs to the military camp in Bharathipuram in Killinochchi District. The women underwent a
medical exam conducted by male military doctor and a male-nurse. All information was gathered in Sinhala, except for their names and addresses. The women were also requested to provide a letter of
recommendation from GS or Justice of Peace and/or from Christian priest for Christians, birth certificate, and school leaving certificate and to hand to police in their area of residence. Subsequently, the women who went to deliver their documents to their police
who fingerprinted them. Later on military personnel visited the houses of these women and instructed to join work on the 15th oo November.

The military informed the women and girls that they
will be in 03 month residential program to learn Sinhala and English.

On November 15th, male military personnel picked up the women from their homes and transported them to the Bharathipuram camp. The first day was spent collecting detailed personal information of the women. A military function for new recruits was held on the 16th, the second day. It was only then that the women realized that they were to join the military. Some panicked and called their families, and informed the military that they did not wish to join. The military informed them that they could only leave after the function. On the 17th the function was held inside the Army camp while some of the family members of the women protested standing on the other end of the same military camp.

A female military officer stood next to each new recruit thus preventing the women from communicating with their families. Fathers of these women had been garlanded and the mothers
were given badges with the title of ‘brave mother’. Of the 109 girls, 6 were released due to the efforts of their families. As a result, the rest of the women were permitted to meet their families without any restrictions. As of 2nd December, mobile phones have been barred inside the camp.

This situation raises grave concerns regarding the role of the state and the military in the lives of women, particularly from Killinochchi and Mullaitheevu, the need to provide physical fitness training and the continued militarization of the North, and the continued security of these women while in service. In two other occasions civil service appointments (Montessori teaching and working in government farms run by the military) have been given to women through the involvement of the Civil Defense Department of the Sri Lankan military rather than the relevant civilian administration bodies. The militarization of civilian administration and of the community in the Wanni raises deep questions regarding the commitment of the Sri Lankan Government in creating a society that is equal, equitable and free of violence.

The UN Security Council Resolution 1325 clearly states that the full participation of women is essential for the rehabilitation process in the post war situation, and women’s specific needs should be taken into account in developing a prerequisite to disarmament and demilitarization. WAN is deeply concerned about the lack of choice and decision-making power for women in the formerly war-torn areas request that the civil administration be completely handed over to civil structures as a genuine measure of the Government’s reconciliation program