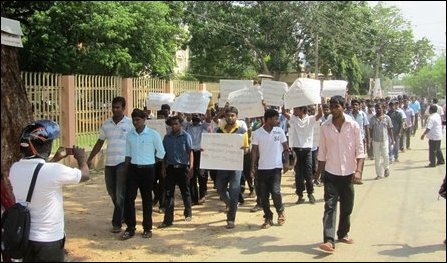 In northern Sri Lanka, Jaffna University students who boycotted classes on Wednesday and rallied in front of the university entrance Wednesday at 11:00 a.m. protesting against the SL military harassments inside the University premises on Tuesday on the occasion of Remembrance Day, were brutally attacked by Sri Lankan military commanders who had taken position on the road while the students were peacefully walking on a demonstration march.


Sri Lanka has started a two-day boycott after being brutally attacked by security forces on Wednesday. Across the former war zone in northern and eastern Sri Lanka there is a higher military presence than usual. The military rule of north and east oppressing all the Tamil people.


After the 2009 May Genocide committed by Sri Lankan government, the military rules the Tamil areas.


The University students gave the birth of people’s uprising which was offset by the war and continual suppression.


Four students were arrested by Sri Lankan police in their house at mid night today and taken into custody for further investigation.

This is not the first attack on Jaffna University students by the police and the Army. In May 2011 Comrade Thavapalan, the General Secretary of the Students Council, was brutally assaulted near an Army check point.

However, there hasn’t been any investigation carried out regarding this act. Again in May, 2012 Comrade Paramalingam, who was the General Secretary of the Students Council then, was similarly attacked but no one was arrested.

Everyone knows that such attacks cannot be carried out unknown to the Army or police in Jaffna peninsula where a semi – military administration is being maintained.


The international progressive and democratic forces should support student’s struggle within a opened jail of Sri Lankan military. 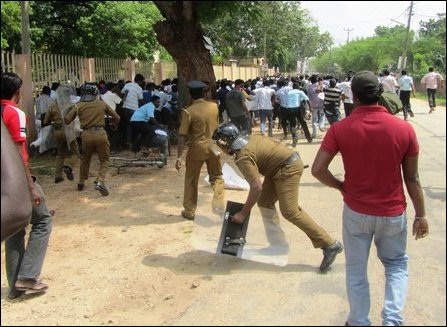