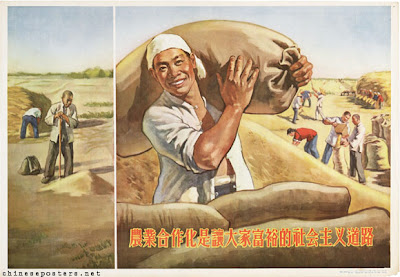 Democracy and Class Struggle publishes this article for information and is not an endorsement of poltical line of author, we see the Land Reforms currently proposed in China as being Land Privatisation and not being true reforms at all, all right wing reversals are heralded as reforms.

More robbing of the peasantry of their land despite words to the contrary, Chinese Revisionists excels at sophistry and double talk on the Land Question and Chinese Peasants know that only too well.

The 18th Party Congress of the Communist Party of China (CPC) commenced on November 8, 2012 amidst speculations from every corner of the globe about the closed-door meetings. Hu Jintao’s opening remarks gave many leads as to what the main themes being discussed were.

However, his statement, “We should give more to farmers and take less from them and lift restrictions over their economic activities”, on the condition of farmers and land grabs has made many speculate about the future of land reforms in China.


This analysis will try to probe into the history of land reforms in China, the land grab process post-liberalisation and why it is so important for the CPC to usher in land reforms at this point of time.
Land Reforms in China: A Short Analysis

CHINA underwent two major land reforms after the Communist Party of China assumed power in 1949. The first set of land reforms was introduced by Mao Zedong and the second set of reforms after Deng Xiaoping liberalised the Chinese economy.

Mao Zedong had credited the success of the CPC in 1949 to the peasants. and soon after the CPC came to power, the first set of land reforms was introduced in China. The Central Government of the People’s Republic of China published a Land Reform Law on June 30, 1950. Land was confiscated from big landowners and redistri-buted among peasants. Farmers were allowed to till the land and sell their produce to the government at fixed prices. It was an “unavoidable choice under the forging ahead or heavy indus-trialisation oriented development strategy” (Chan and Zhang: The China Quarterly, p. 821) which required the rural population to produce and sell at low prices to support the industry. However, this private/family ownership led way to cooperatives in 1953. Mao encouraged peasants to form cooperatives so that a single crop can be grown more efficiently. The farmers resisted this move but were pressurised by party cadres to follow it and by 1957 almost 90 per cent of the land was brought under cooperative farming.

However, after Deng’s liberalisation policy in 1978, land was de-collectivised and a new household contract system was implemented, which meant that land was given to farmers for thirty years for cultivation while its ownership was transferred to the village committee instead of individual farmers. Collective-owned land was divided according to the numbers of people in the collective and contracted to peasants for cultivating and managing. Not only did the countryside witness significant changes, the Chinese economy took a giant leap with the establishment of large manufacturing units, export houses and numerous industries. Land, therefore, became an integral asset required for the establishment of these units as well as for the urbanisation of cities. This economic boom paved the way for land grabs in China wherein the village councils started selling off lands transferred to them under the household contract system to real estate developers at phenomenal prices without compensating the villagers at the same price.

SINCE the year 2000, cultivable land in China has declined by eight million hectares whilst in 2011 alone, almost 410 million square metres of land was acquired for real estate development. This was acquired for over US $ 129 billion. However, a study conducted by Beijing’s Renmin University indicates that, a quarter of farmers did not receive any compensation for their land. According to the survey, almost two-thirds of those who did receive compensation got a lump sum that averaged US $ 3000 per mu, a Chinese unit of land equivalent to 0.16 acres or 0.07 hectares. The average land sale price was US $ 123,467.97 or more per mu for local governments, which is 40 times the average compensation that was given to farmers. With the villagers left estranged at the hands of their village committees all over China, many rose up in revolt.

These widespread revolts led to the formulation of some new rules in January 2011, stipulating that violence cannot be used to force home-owners to leave and that compensation must not be lower than the market price of land. The Supreme People’s Court in April 2012 clarified and tightened these rules in a bid to “protect the public interest and guarantee the legitimate rights and interests of expropriated homeowners”. Under the tightened rules, government authorities that cannot reach an agreement with residents can apply to a local court for approval and must provide additional documents to prove their case. These include a “social stability  risk assessment” as well as “feedback from homeowners and the party which enjoys the direct benefits” from the land expropriation. In addition, the amended rules—which came into force in April 2012—lay out a series of reasons for local courts to reject the authorities’ applications for land expropriations. However, the problem lies in the loopholes provided in these rules which are often used to get past the laws.

Under the existing rules, the state can nationalise the collective-owned land over reasons such as “public interest” and transfer farmland for industrial and infrastructure-expansion purposes. (Xinhua: November 2012) If one analyses Hu’s opening remarks and postulates the outcome of the 18th Party Congress as far as land reforms are concerned, it becomes apparent that the CPC will ensure equal exchange of factors of production and balance the allocation of public resources between urban and rural areas. The difference between the earnings of a rural and urban household in 2011 was US $ 1108 and US $ 3462 respectively. Hu’s statement that the Chinese Government will no longer sacrifice the property rights of farmers to reduce the cost of the country’s industrialisation and urbanisation has led to speculations that the ownership of land might be transferred to individual farmers. This would be a major change that will be introduced in the rural hinterland after the CPC assumed power in 1949.

THE questions that arise from these hypotheses will remain unanswered till the new leadership, which has taken over after the completion of the 18th Party Congress, formally announces the new land reforms. Although it leaves many wondering whether China—the second largest economy of the world—will actually sacrifice its rapid industrial development by giving all these rights to the farmers, the more important question is whether the CPC will be prepared to risk more farmers’ revolts by denying them their long deserved rights considering the fact that land appropriation is one of the primary reasons for social unrest in China. Yu Jianrong, an expert on civil unrest at the Chinese Academy of Social Sciences, wrote in 2010 that disputes over land were behind 65 per cent of social disturbances in China’s countryside which is precisely the reason why this issue needs to be addressed with earnest efficiency.

Xi Jinping’s speech after taking over as the President gives us some hints as to the future of these land reforms. He said “to emancipate our way of thinking, insist on reform and opening up, further unleash and develop social productive forces” and “corruption and bribe-taking by some party members and cadres, being out of touch with the people”. One thing though is very clear from his speech: economic development will continue unabated and corruption amongst the party cadres is the major cause of social unrest in China. The author interprets this as the unrest which is happening due to land grabs, migrant rights issues and so on; these are the consequences of corruption amongst the party cadres using means such as not giving full compensation to farmers, grabbing more land and compensating for less etc. and not so much due to the process itself. However, before reaching any clear-cut conclusion, one needs to wait and watch how the new leadership deals with this issue and the social unrest that it has caused.