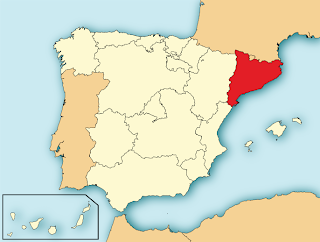 Catalonia last week have given further support to the
Catalan nationalist cause and increased the likelihood that a referendum on
independence will be called in the country at some point in the future.
But, as the general secretary (GS) of the League explores in the article
below, the Spanish state is doing all it can to resist attempts of the
Catalans to exercise their democratic right to self-determination. The GS
argues that Catalonia’s fight for independence is part of a growing
movement of the peoples of Europe who have the potential to redraw the
European Union (EU) and shift the balance of power to a more equal footing.

The Spanish state have argued that a referendum on independence in
Catalonia is unconstitutional and successive Spanish governments have
repeated time and again that they are not willing to amend the constitution
to allow the people a right to self-determination. The Spanish Parliament
is so concerned that the people of Catalonia want to run their own affairs
that Spanish military leaders have even publically threatened the Catalans
in recent years with violence if they continue to pursue this particular
political goal.

The concerns of the Spanish authorities that Catalans do want independence
are more than justified. There have been several highly organised,
privately sponsored and voluntarily run referendums over the last few years
that have shown the potential support for independence among the Catalan
people. In a recent poll, the Barcelona-based Centre d’Estudis d’Opinio,
showed that 51 per cent of Catalans would vote in favour of full
independence. The results of the poll was a motivating factor for the
Catalan parliament to vote in favour of holding a referendum on
independence for the first time in its history, but whether the Catalan
parliament will realise this aim in an official capacity remains to be seen.

The Catalan elections that were called last month, two years before the
elections were due to take place, was an attempt by the Catalan president
Artur Mas of the ruling right of centre Convergència i Unió (CiU) political
party, to capture the popular support that the independence debate is
attracting among the general population, especially since the deep economic
crisis that Spain currently finds itself in. However, the CiU actually lost
62 seats in the election showing that independence is not a political
football that can be used by political parties as and when convenient. The
CiU has not always advocated independence (and Mas has previously stated
that he is not in favour of full independence for Catalonia), but Esquerra
Republicana de Catalunya (ERC) who saw their representation almost double
in the election, has always been a strong supporter of independence. CiU
remains the largest bloc in the parliament, winning 50 seats out of the 135
available, but the ERC has achieved an enviable second place and are in a
position to start demanding concessions of their own, if the CiU want their
parliamentary support, which may be necessary.

The Catalans are resentful that their request for greater financial
autonomy -similar to what the Basques enjoy - has been rejected by the
Spanish government. Similarly a request by the Catalans for a greater share
of the 18bn-euro (£14bn) Regional Liquidity Fund that was given to Spain by
the EU to cushion its economic down turn earlier this year was also
refused. In protest a massive 2 million people marched through the streets
of Barcelona, the Catalan capital, in September 2012 demanding
independence. Soon after the march the Catalans voted to hold a referendum
on independence. The Catalans argue that a disproportionate share of its
wealth, through taxes, goes to Madrid than is received from central
government spending in return, which has affected their economic growth.
Catalonia is a country of 7.5 million people, a 200 billion euro (£161bn)
economy and its own police force. Catalonia is bigger than Belgium and
richer than Portugal and Andorra combined, which are all independent states
recognised by the European Union. If Catalonia became independent, the
effect on the Spanish economy would be significant.

If preparations for a Catalan referendum took place there would be a risk
that the Spanish authorities would attempt to block it, either through the
courts or with force. The Catalans could attempt to take the case to an
international court to get justice or appeal to the EU, but the EU is
unlikely to give much support. The issue of ‘internal enlargement’ for the
EU could turn into a huge political headache, triggering as it could a
domino effect in Italy, Belgium and the UK. The EU will want to avoid
discontentment among many member states and, despite its ‘richness in
diversity’ motto, may want to make independence as unattractive an option
as possible for countries exercising their right to self-determination. EU
states are not ethnically homogenous and comprise at least one national
minority group. If each national minority decided to pursue their right to
self-determination, the EU of the future will be a very different place to
the EU of today. Suggestions last month from Jose Manuel Barroso, president
of the European Commission, were that Catalonia as an independent state
will not be automatically granted membership of the EU nor the monetary
union, but this has not yet been stated categorically.

The SNP will be watching closely as events unfold in Catalonia and
similarly Catalan nationalists have been enviously following the
developments in Scotland. It was rumoured that president Mas wanted to
emulate the success of the Scottish National Party (SNP) by calling early
elections, even if the tactic did not pay off for the CiU. In Scotland the
terms of the referendum may be agreed between the Scottish and UK
government for 2014, but the Yes campaign has still to convince the
majority of the electorate that an independent Scotland is preferable. It
is not just Catalonia and Scotland that are perusing political
independence. Support for greater autonomy among the peoples of Europe has
been steadily growing over the last decade, with moves towards
self-determination gathering pace over the last few years year. The islands
of Guernsey and Jersey both toyed with the idea of declaring their
independence last summer with Jersey's assistant chief minister saying in
June that the island "is ready to become independent if it were necessary".
Rumours abound that the Flemish parliament will soon hold a referendum with
the Flemish nationalist Nieuw-Vlaamse Alliantie (N-VA) party retaining a
strong political position following the provincial and municipal elections
in October 2012, which included the significant win of the Mayorship of
Antwerpen. In addition Süd-Tirol is hoping to organise a referendum on
independence in 2013 and the Veneto regional parliament plans to vote soon
on whether to hold an independence referendum of their own. It seems
inevitable that at some point one of these European territories will
declare independence, but nobody knows what will follow. If a territory in
Western Europe declared its independence in the same way as Kosovo did
recently, its impact would reverberate throughout the EU and the rest of
the world.

The peoples of Europe are on the move and hold the future in their hands.
Their fight is older than that of the EU member states to which they
currently belong and their voice is steadily growing and won’t go away. The
fight for political independence for the historic nations of Europe is no
longer a nationalist dream of progressive democrats, but a serious
political goal that cannot be kicked into touch anymore for minor political
gain. The political, social and economic needs of the peoples of Europe
need to be addressed fairly and thoroughly and if this right is being
denied by the governments of EU member states then they should be shown up
to be the bullies they are. The key to a fairer and more democratic EU lies
with the peoples who comprise Europe and not with artificial political
states that hold all the power in too few hands. If the EU cannot exist
within a more democratic model then change needs to occur or the system
needs to be confined to the scrap heap of history. It is the responsibility
of the people to address the balance and that is precisely what the
Catalans, Scottish, Basque, Welsh, South Tyrolean’s, Cornish, Venetians,
Bavarians, Bretons, Kaszubians, Manx, Corsicans, etc. … are trying to
achieve.