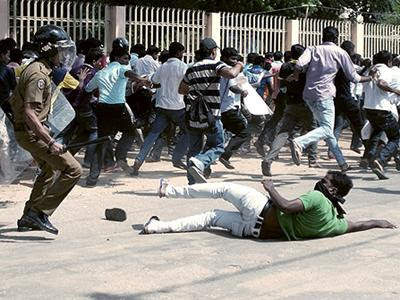 We strongly condemn the Sri Lankan Military repression of a student Demonstration in Jaffna on Remeberance Day.
The continued rule by the Sri Lankan Military in Tamil areas is an insult to democracy as are the Sri Lankan Governments continued Land Grabs of Tamil Lands.
There can be no peace without justice.
We urge the people of Sri Lanka and our Tamil comrades to reject bourgeois nationalism with its pro imperialist movements and especially Indian expansionism .
The nature of any genuine nationalist movement should be anti capitalist and anti-imperialist.
The Sri Lankan Tamils fight for their self determination and should join the worlds anti-capitalist anti-imperialist movements.
Capitalist Global Imperialism planned the Tamils Genocide hand in hand with Indian expansioniism.
They fed Sri Lankan fascist president Rajapaksha.
We urge the Tamils who have a social conscience in the diaspora to take your place in the anti-imperialist movement thorough out the world.
.
We urge the Left in Sri Lanka to also reject the anti marxist bourgeois cosmopolitanism that rejects the right of self determination for the Tamil people.
With a new anti imperialist revolutionary leadership coming forward in the Tamil community and the Singhalese Left rejecting bourgeois cosmopolitanism then a new chapter can be written in Sri Lankan history with the unity and harmony of all its people's.
Without class struggle against imperialism and its local cliques the Tamils will never achieve self determination and the Singhalese Left without rejecting bourgeois cosmopolitanism create their own barrier to a successful Tamil/Singhalese struggle for a better life for all working people..
Smash the twin evils of bourgeois cosmopolitanism and bourgeois nationalism - forward to a Socialist Republic of Sri Lanka
March 26th Movement - British Isles
Democracy and Class Struggle - Wales
The Pan- Afrikan Voice - London
Great Unrest Group - Wales